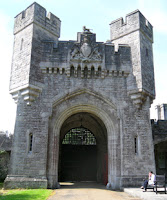 As some of you may know, I was in England this past summer to attend a family wedding held in the town of Arundel. So while there, we explored the castle, and knowing that I had another commission in the works, I took lots of photos.

This photo, from among the hundreds of photos I came home with, showing the castle gatehouse, became my inspiration.


My commission centered around an artisan doll dressed in medieval attire and carrying a hunting owl at her wrist .....so it just begged for an outside scene. 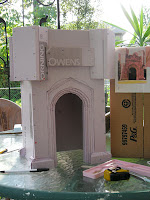 But how do you even begin to show the massiveness of such a structure..... certainly not the way I started out! Much too boxy...
That's when you have to remember about perspectivism. Anything running off into the distance, whether a road or a tall building, will become progressively smaller the further away from you it is. Even in the photo, the actual gatehouse appears to be smaller at the top than on the ground.


I was size constrained since my gatehouse was being shipped to California. During design discussions I had promised that the doll could be placed inside as well as along the outside of my build ...so on the ground next to the building and on top between the embrasures (the term for the walls between the turrets) or inside.

I always start out with a design in my head but as I work, the building decides how it wants to look. 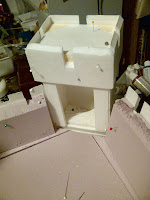 I wanted to add a few special details, such as a secret staircase inside one of the turrets; the secret being is where it leads to, because all anyone can see, are the top of the stairs ....it's nowhere to be seen below. 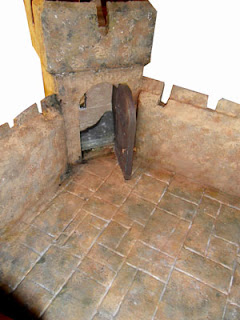 I sweated bullets worrying whether those stairs were achievable. In the end, it just came together as if it had been meant to be....

The inside of the actual building 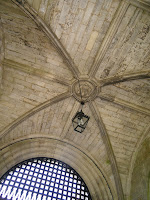 had a vaulted ceiling. I had never done one! Had no idea how to start! I spent a few more nights laying awake puzzling that out.... but in the end, with as much glue and plaster on me as on the castle ceiling, I think I've managed a reasonable facsimile. 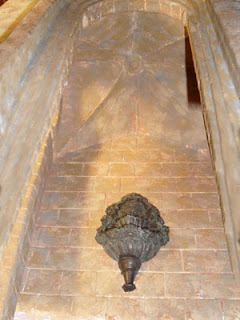 The third feature of the Castle Gatehouse is the fountain, shipped to me by my customer.  I wondered whether to create an attached wall for it but couldn't come up with an idea for how to end the wall; so in the end, rather than a fourth gateway, the back became a wall with the fountain glued on. .....and then I worried whether my glue would hold during its transportation to California so I created a support for it to sit on.
It's a lovely 2 part fountain with water shown running out of the lion's mouth into the upper fountain bowl but how water gets into the second bowl isn't indicated.

Well, if you know me & realism, you know I just couldn't leave it and while I was at it, I figured I may as well show some water overflowing to the stone floor below. 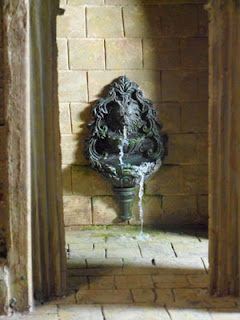 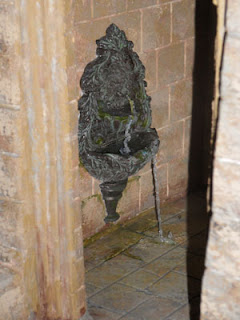 So there you have it: the Castle Gatehouse, which at the time of my writing this, should be halfway to it's new home. Fingers crossed that CanPost and the USPS don't feel the need to play football with it!!

In case I hadn't mentioned it, each of the turrets has a door but only the one is open.

As you can see the right side of the floor at the base of the gatehouse has plenty of room for "M'lady of the hunt", or a prancing steed or even a knight companion. Fingers crossed we'll get to see photos.
Posted by Karin F. at 11:49 AM