A thread has come up on Facebook ….yet again about copying. A well known miniaturist received a comment on her blog to a post from last year in which the blog owner complained about copyists.
This is what she received:

"Hi, I've been reading your blog and find your art wonderful! I especially liked the …………. In fact, I would love to try to make one myself! I'm not sure I understand why you're upset in this post. Isn't copying the best form of flattery? And don't many mini makers use tutorials to help them create? Is that copying then? Some blogs even HAVE tutorials that show you exactly how to make stuff. I guess those people don't care if you make it (their's (sic) originally) and sell it as your own? I want to start selling some of my minis, but I am very confused and I don't want to be labeled as a copycat or a bad person. Any advice?"

A number of people posted to the Facebook thread, some who aren’t threatened, some who are because they supplement their family income, some are simply extremely protective of their “babies” and then there’s the opinion from the “sidelines”:

“I too would like to make minis to sell... but fear of failure and not wanting to be a copy cat stops me cold! The trick is to make something NO ONE ELSE DOES or to make it so DIFFERENT that it doesn't look like another's. (Examples ~ dolls, teddy bears, furniture... there are thousands of makers, but all the good artisans have their very own style, technique, etc.) Am I right?"

Being a miniaturist means we imitate life ...just in a smaller version. Does that mean I want to discover that someone is making an exact copy of one of my castles? NO! Have I used someone else’s techniques to build mine? YES!
Even though I've taken those techniques and adapted them and changed what didn’t suit me, does that make me a copycat?????

I am fascinated by how Rik Pierce produces his creations and save his techniques whenever I come across them. I noticed that another artisan who is now teaching a workshop at the Chicago Bishop show, had taken a class with Rik. That building/workshop appears to be based on those techniques. Does that make him a copycat????? Does it give him license to earn money giving a workshop?

The lady, who left the comment that started the Facebook thread, wrote several posts on her own blog in which she showed photos of things she had created in miniature ….they were all mini reproductions of items from the Harry Potter movies.
I, myself, have made M&M candy people in miniature. Does that make the both of us copycats …since we’re using intellectual property that has been copyrighted? PROBABLY!

I’m not sure that it’s any longer possible to “make something NO ONE ELSE DOES or to make it so DIFFERENT that it doesn't look like another's”. Blogs, Facebook, etc. …even websites make everything too inter-related. Even if you don’t mean to copy and don’t work with a photo of someone else’s creation in front of you, can you be sure no one has ever made one like it? NOT LIKELY!

Should you stop trying out tutorials or acquired techniques? NO! ...at least not in my opinion. Applaud the generosity of the person who wrote the tutorial or taught the technique. These are how we learn and grow in our chosen hobby.

I’ve noticed that in the last year or two, complaints about copycats have increased and tutorials have decreased and nearly died out. It’s an extremely sad commentary. Is it warranted? Can we do/change anything to reverse the situation....


One caveat before I end this post:
The only reason I sell is because I make more than I can use ...I do not use the money that I earn to supplement my income, so my view will be different from someone who does. It certainly doesn't make me right or them wrong!
Posted by Karin F. at 11:07 AM 7 comments: 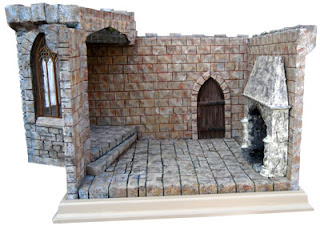 The castle is made entirely of builders foam, carved and painted to look like stone. 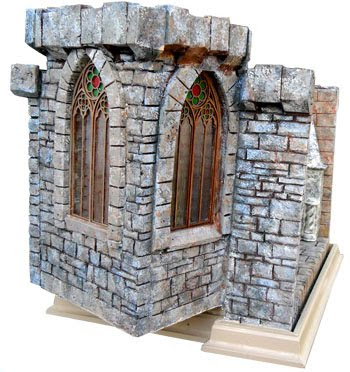 ...except for the windows which are created by Angela Downton in the UK. 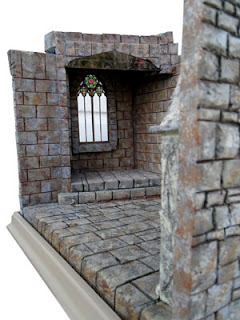 A view into the throne room. 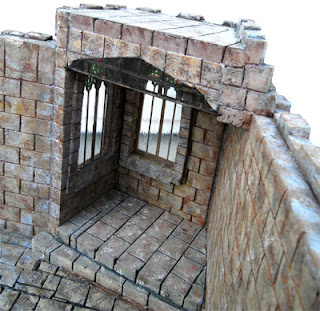 Even the fireplace is made of foam... 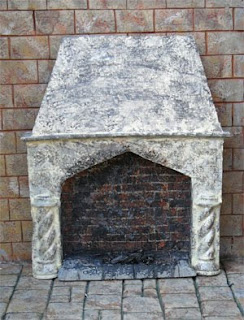 All that's left to do is order the plexiglass cover.

I have one more castle roombox to make; this is one of the windows that will go into it

and again the laser cut window frame is a Downton original.

And then I'll enter the latest Greenleaf contest. I really hadn't meant to do this because like most miniaturists, I have a room full of kits that need assembling and had really planned to finish some of them during the summer. I've bought the sales front, and the greenhouse as well,
planning on turning this into a roadside stand/market garden. I have some ideas for doing trompe d'oeil work on the inside of the store and greenhouse. This is something new for me that I've long admired but never attempted.
As for the front, I thought of a dusty roadside stand typical of the early to mid 20th century.
However as a friend so kindly reminded me, the garage that I started out with during the 2010 SpringFling, ended up as a fishing hut instead... 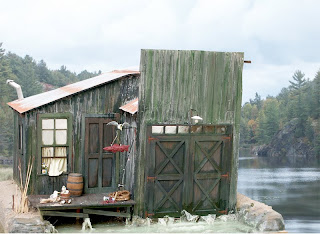 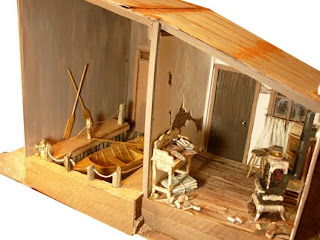