Several years ago, I discovered that my area of the world had a real live dollhouse museum, the Mildred Mahoney DH museum in Fort Erie Canada. It sounded like a fantastic visit to combine with a cross border shopping trip and a visit to my son who lives 3 hours away from me. Unfortunately what I didn't realize was that the museum was in the process of stock taking with a view to closing down and selling up ...another victim of our economic times and lack of marketing/advertising savvy.
When I got there, the door was closed and although there was a sign that said to knock, no one ever answered. What a disappointment! However it in no way overshadowed the success of the rest of my trip and my visit with my son.

Imagine my surprise then, when several months later, one of the auctioneers who I subscribe to, announced that they would be in charge of the sale of the museum's contents. And with a preview day, I'd be able to see all or at least most of the items without the boredom of sitting through the auction itself.

I hassled my poor husband into coming by promising we'd buy a couple of lawn fertizer items in Buffalo NY, that are unavailable here; we made a mini vacation of it and I even brought our dog who of course was so interested in all this travel that she slept through most of it.

I'm a dud when it comes to the past history of dollhouse making so it was extremely interesting to see many of the houses. Even the museum building had a fascinating past in that escaped US slaves were housed in secret locations there until they were able to be transported across the river and into freedom in Canada.

I won't bore you with detail about the rest of our trip or the extremely chinzy motelroom with its flocked wallpaper and the red heart shaped whirlpool tub in the middle of the room where we stayed in at Niagara Falls ...or even how I managed to engulf much of the room with shampoo bubbles (thanks in part to not having any bubble bath liquid); I won't even mention smuggling our small dog in and out of the motel nor my husbands' fears about getting caught and possibly getting kicked out.
Let's just say a great and interesting time was had by all although I will always have it reinforced in my brain that it is not a good thing to take a husband with you while shopping!

Back to 2012: I received an email from Rebecca who edits the e-mag, Dolls Houses Past and Present, asking for contributions. She's done a great job with some of my photos. Take a look at my contribution.

FYI: I'm off to England at the end of July and looking at my photos, makes me more determined than ever to try and fit Queen Mary's DH in. Fingers crossed we find the time!
Posted by Karin F. at 10:04 AM No comments: Links to this post

Do you ever get a creative block? Usually it has to do with a concept ...you know what your end result should be but you just can't get past that starting point. I guess that was the trouble with Castle Maureen. 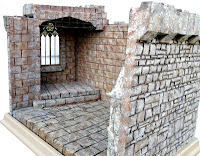 Several false starts, a total rework of the ante chamber along with an added technical problem and what should have been easily completed within one month turned into a laborious on-going process of several months. But until it was completed, I couldn't in good conscience begin the next commission. It didn't help any that my customer for whom Castle Maureen was intended was also the same customer who had ordered the Ruined Castle. 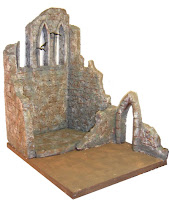 None of that occurred with the Enchanted Castle.

It really helps when you know what your customer has in mind. Having asked her to name her castle, I received this description along with the name:

This enchanted castle, built of grey stone and set deep in a forest, belongs to a scholarly knight. It contains a great many stained glass windows and appears to be thriving. It is approached by a tree-lined avenue. Nearby is a busy dwarven settlement in which there is a conjurer for hire. The holding is rich in mystery. Within the tower is a mysterious and seductive woman whose charms ensnare her lovers in bonds of irresistible desire, often leading them into compromising, and dangerous situations. Many a guest have visited but few find the will to leave the ”Enchanted Castle”.

I don't know about you but reading that immediately gave me an image of what I should be striving to build ....which was a castle rising out of the cliffs. Now you might be tempted to go back and re-read that description. Nowhere do you find the words: cliff, rocks or stone! Don't ask me why but I just knew this castle had to be surrounded by mountainous rocks and stones. When your project tells you what it should turn into, you'd better darn well pay attention. ...and I did!
This time there were no delays, no reworks... Everything came together as it was meant to be.
This is my version of the Enchanted Castle: 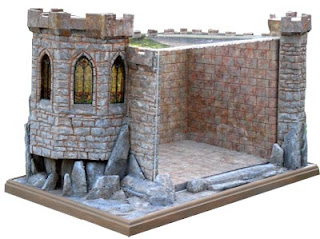 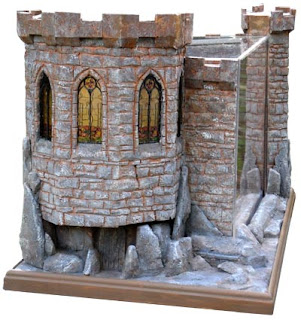 Can you see the tiny door hewn into the rock wall beneath the turret? I hope it's large enough ...because when I think of dwarfs, I think of the little guys in Snow White singing "Hi ho hi ho, it's off to work we go", while marching off with their pick axes over their shoulders to work in the mines. 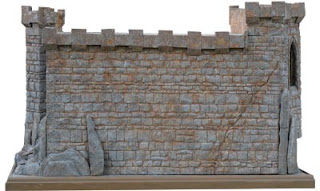 But obviously all their hard work tunneling underground isn't helping the castle structure. I think it just might be their fault that the castle wall has developed a large crack. 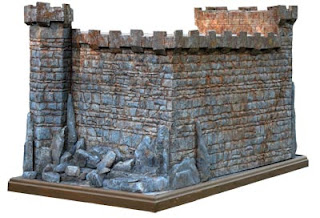 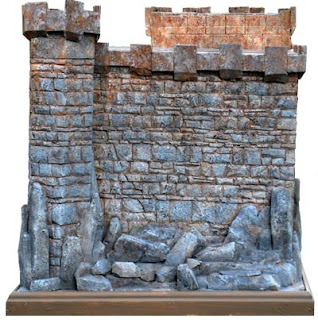 A tower was mentioned in the description ....and here is the tower! If I were keeping this castle, I'd have roses climbing up its heights. But perhaps I'm just switching fairy tales from Snow White to Sleeping Beauty whose castle was shrouded by brambles and other various thorny plants. 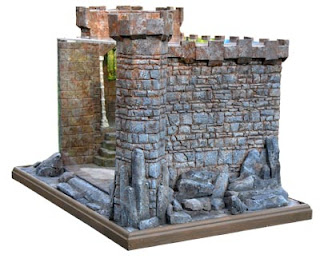 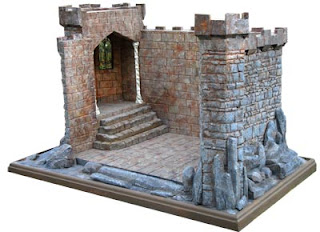 Even the columns supporting the entry to the ante chamber were hand made. 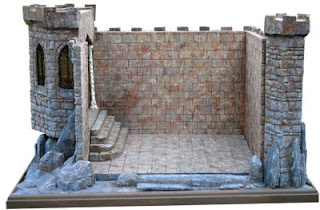 All that's left to do, is begin the arduous task of finding a secure box so it can be safely shipped to its new home.
Posted by Karin F. at 7:14 AM 5 comments: Links to this post