Well, I certainly picked a controversial subject!
Opinion appears to be firmly divided between people who are sellers and those who are hobbyists; by the comments that I received, it seems that many more sellers are affected by copiers than I thought.

I don't want to harp on this topic; it appears every so often & I think I mentioned it once before. It was not my intention to do more than remind people that giving credit is simply good manners. Now having said that, it's sometimes extremely difficult to remember where your inspiration came from.

A couple of years ago, I made a fimo mouse sleeping inside a real size teacup; I placed a letter to Santa and a plate full of cookies & carrots next to him. I just knew I'd seen that before but couldn't for the life of me remember where. Several months later I found the original. It had been an image on a Christmas card.

On a miniature site, well known for its Saturday tutorials, the lady whose pumpkin pram started this latest round, showed off her latest creation. I saw her post, fell in love with her creation & proceeded to make one just like it ...and then posted my version almost directly below hers. Who knows how long it had taken to perfect hers. Obviously mine looked nowhere near what it was meant to be; as we say here: close but no cigar! But the lady in question got extremely upset. So maybe long standing feelings of guilt caused me to dust this topic off again.

Here's a few email quotes sent to me about it. I'm not going to name names and I hope the people who wrote them won't object:

"It (i.e. copying) certainly shows no imagination, no original creativity and NO TALENT."

"I say create and be happy. Be inspired and give credit. Don't blatantly copy." 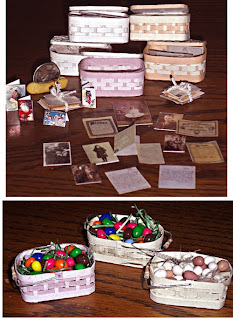 These were inspired by a tutorial from Kris of 1inchminis. Here's the link but before you point your finger at me, let me just say that there were a lot of baskets that didn't make it and a lot of sewing baskets made before I was happy with my adaptation.

Oh and by the way, here's what Kris wrote me: "This is the best compliment you could give me, taking a tutorial and making it your own. I love it and I am so glad to see you using the information." Thanks Kris!
Now isn't it nice when you give credit....
Posted by Karin F. at 7:18 PM 2 comments: Links to this post

Definition of COPY - An imitation, or reproduction of an original work

Now I know that the miniature world is really an imitation of the real one and we are all copiers in some respect but that does not mean we can blatantly copy what another miniaturist has made without asking for advance permission or giving credit after the fact! It definitely does not mean you can copy to make something to later sell!

I can tell you right now what the result will be: no one will want to show what they're making; most blogs will cease to exist; and this wonderful miniature community of creative artisans will implode & fragment.

All I've heard lately are upset miniaturists who feel betrayed by copiers.
My baby dragon with the butterfly on his nose was copied ...except I didn't find that out until much later because I do not follow the lady who copied me; I do however follow the lady who copied the first copier. I showed my dragon on only two places: on my blog and on a forum that I belong to. The dragon was made following a tutorial but the idea of having a butterfly sit on his nose & having him reach up to it, was mine.
I have seen witches' potion bottles and other accessories copied. And now the latest is a pumpkin pram. I'm not going to name names. That's not my place.

All I'm saying is take heed! If you like things the way they are, if you enjoy seeing what other miniaturists make and being inspired by them, if you take pride in your work and want to show it off, then give credit where credit is due.
Posted by Karin F. at 9:09 AM 22 comments: Links to this post

Look what the mailman brought.... 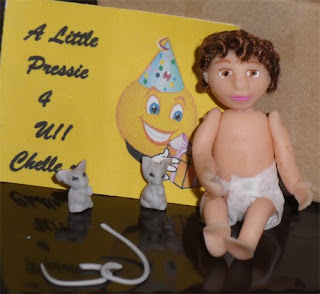 Chelle, thank you so much for your friendship which I truly value ...not to mention unexpected prezzies in the mail! (ears and tails arrived unbroken LOL)

What a Crazy Winter!

It's been a really weird winter with ups and downs quicker than bungie jumping. A week ago Thursday we got 11 inches of snow overnight. 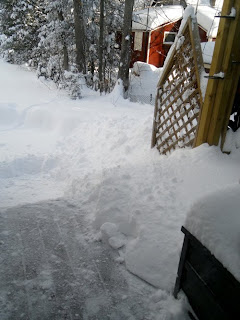 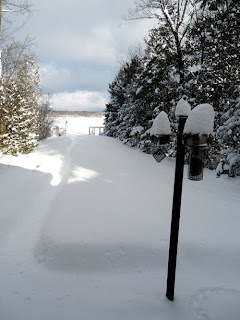 Then as soon as we got the deck cleared off, the weather turned mild! 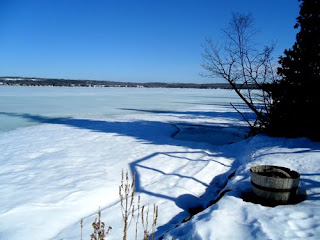 Open patches appeared along the lake shore. But as you can see we still had a tremendous amount of snow left 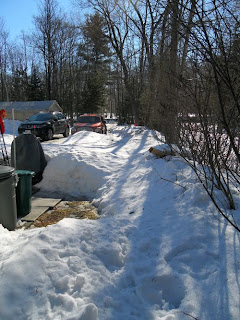 and since our roof is metal we really had to be careful when walking along the side of the house. When the snow slid off, it sounded more like mini avalanches. My deck was inundated ...again! Only this time with heavy snow & chunks of ice.

Last night there was a weather warning out for our area telling of up to 100km strong wind gusts. Every time I fell asleep a gust of wind would rattle the house and wake me. At about 2am I finally gave up. It was just too scary to close your eyes! We were finally downgraded to 70km winds and I don't really know just how strong the winds were but at times I could literally see the glass in my picture window moving in and out. 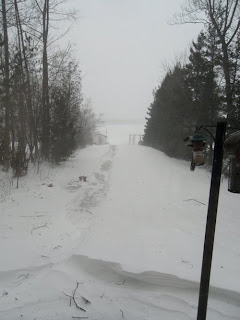 These photos were taken at about 7am, when we finally went back to bed. With all the trees around us, we were extremely fortunate that only small branches came down. And now as I write this ...it's almost noon and visibility once again is reduced with big chunks of snow falling. 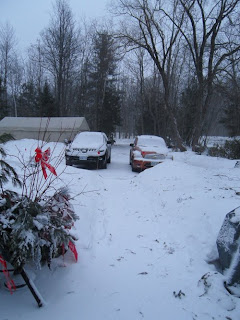 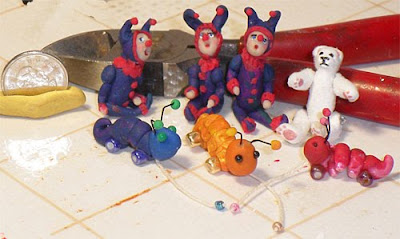 was with Kaisa in Finland; she wanted some toys to put in her toy shop in exchange for a pair of her skis. Of course I never could see any sense in only making the right number of required items. I always make more.
The orange caterpillar pull toy, the polar bear and the clown in the middle went to Finland. By the way the bear is fully jointed. I meant to make tiny 1" jointed dolls as well but they just wouldn't agree to that.
The other toys are meant for my Gathering sales table. By the way, that London Gathering I mentioned is being held in London Ontario. I'm not quite the international jet setter that some of you thought LOL

I'm almost finished the 20 items for the memory trunk swap. Can't show you those yet but as soon as I take a photo, I will show you the totally unexpected parcel I got from my friend Chelle. Chelle, I'm totally blown away.... wow!!
Posted by Karin F. at 9:56 PM 3 comments: Links to this post

Activities include these fun events:

HELENA from Belgium and NATHALIE from France will create a special witch and halloween table filled with fimo goodies as a joint effort. One class Saturday, One Class Sunday - with two more round tables by these teachers as an additional activity.

AND what makes this event so special (differing from our last minidoll convention in Las Vegas) is two very lovely ladies (Fran S from NY and Louise B from Quebec) will be hosting this event in their large homes!! SLUMBER PARTY anyone? A truly girl weekend get away! Wine, women, French cooking and time to relax, create and bond.

WoooooooHoooooOo!! What a way to end the winter blahs! Now all I need to do is finish my February memory trunk swap items, make enough items to sell at the London Gathering in April, find a wildly, extravagantly colorful PJ for July, and make about 30 jack-o-lanterns, and...
Posted by Karin F. at 9:55 AM 5 comments: Links to this post 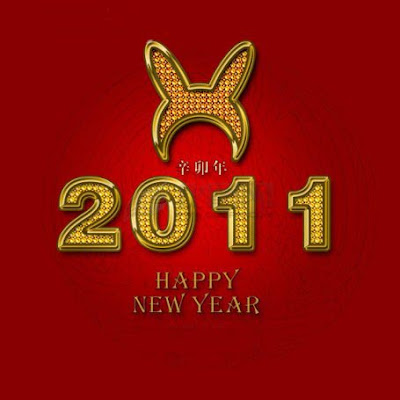 Here's hoping for a quiet, peasceful year...
Posted by Karin F. at 8:59 PM 1 comment: Links to this post