I've been wanting to give you a peek at my little guy who's come up from the basement...you remember, the one I'm making for Ara's swap. But I have no Photoshop & I don't want to do anything with the photos I've taken until I have it back in working condition.
For about a month now, I've had to keep my photos and favorites on a memory stick because my then current hard drive was getting jam packed full & giving my laptop grief. Well, I now have a...for my standards...humongous new drive. Are any of you old enough to remember Commodore 64s? At that time, a 1G drive was unheard of!! No one would ever be able to use or fill that much space.....or so anyone thought LOL!
My new drive is 100G...small in todays world but hopefully big enough to last me a while. I even upgraded to Word 2007. I have arrived into the 21st century at last! Yeesssss!
But my Photoshop doesn't want to play along. So today I'm picking up an updated version of Creative Suite as well....Wow it's great to have techie acquaintances!
In the meantime, until I've got it all installed & humming, I'll keep you guessing with a verbal clue: what's brown & beige when new, been a movie star in it's heyday and could be kept in the basement storage area??
Have a great weekend!

On another note, since I did entitle this post as "Freebies, Give-aways & Contests", here's a little treat you might want to win, to make your miniature creating time a little nicer: 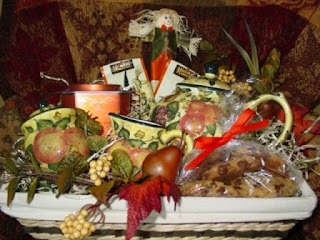 This terrifc give-away is coming to you thanks to Teresa over at Marigold Manor. The only thing nicer would be if it were in miniature. .....hmmm remind me I said that when I get close to 100 follwers & need a give-away to celebrate. ;-)
Posted by Karin F. at 8:37 AM