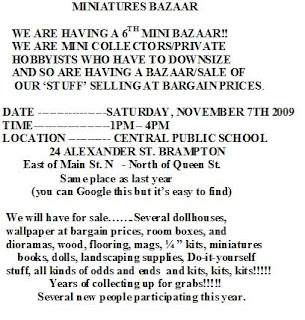 Random thoughts:
In amongs all the swaps I signed up for, comes my first mini show. I spent all yesterday pricing. Today I'll spend some time on last minute details. Although I'm an old hand selling at shows and most of my things remain the same from show to show.....my cash box; tables & tablecloths etc., it's a novelty to sell at a miniature show. For one thing, everything fits into 2 bins instead of 20 like when I sell antiques.
I grew up in Brampton but I'll still need my GPS. It's amazing! You move away for a few years...or ten...or twenty & the city fathers go and change everything on you. Of course when I lived there, the population was several hundred thousands less.
Not sure how bargain my prices are. Every show I've participated in mentions the same thing: "bargain prices". Do they hope to entice people to shop by mentioning it?
I get so tired of people wanting a deal. I pay good money to buy things...be they miniatures or antiques. I believe my prices are reasonable. I do like to make a profit rather than just giving things away. And I have expenses just like every seller: rent, commission etc. So why do people insist on trying to dicker?
At my last show, I had two mirrors made from horse collars. A couple stopped to look and obviously couldn't make up their minds which they liked better. I mentioned that what my husband & I do in those cases is just buy both, if we can afford it. I offered to give them a two for one deal.
The lady hummed and hawed a while then asked what price I would charge if they bought only the one. My response was: the price on the sales ticket.
She hummed and hawed some more. Then she mentioned a price that she would agree to pay. When I didn't go along with that, she hummed & hawed some more.
After numerous minutes of this, she pulled out the amount of money she decided she would pay in the first place. I said no. Her husband pulled out a hand full of coins because according to her, she had no more money. I added enough of his change to make up the difference.
She looked at the mirror then at her hand full of money and calmly told me that having once made up her mind, she never spends more. With that I put the mirrors back and they walked away.
I hope that in their family, the husband does the shopping or I'm afraid they'd go hungry a lot!
I usually spend almost as much at a show as I make. Dealers set up & then prior to the show start, walk around looking at what everyone else has. Generally you spot a bargain that you can't pass up.....forgetting totally why the seller is selling at the show to begin with....which is usually because they can't sell it at their store.
Some things I've made money from; some things I've sat on. (The longer your money is tied up in an item, the less profit there is when it does finally sell.)
Posted by Karin F. at 11:29 AM