Successes but also Some Failures...

....been a while since I posted last.

Christmas was really hectic especially when you consider that my kitchen had to be emptied, was turned topsy turvy, and is still in the midst of renovations. If you've never experienced it, renovations are a bit like being pregnant. You can look forward to it. You're thrilled at the end of it all but by golly, while it's ongoing, it is a royal pain.
I never got my Christkindl market stall finished; it's packed away & I'll work at it again this Christmas. In fact it's been hard to get motivated and do anything. But I did....

I made this... It's commissioned & going to be used in a book. 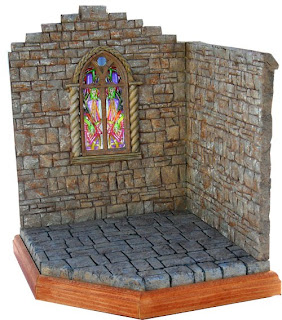 I took Beginners Wigging. This involves a simple hair style called a wigging cross. Literally it means placing 2 hanks of hair, front to back and then side to side, on the dolls head to mimic the real life growth of hair.
I'd heard from a number of people that most beginners start off with too much hair. So I tried to avoid that... 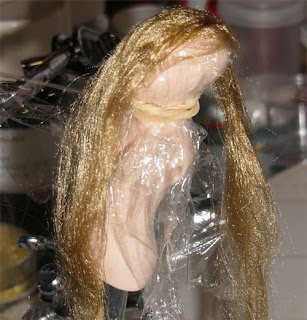 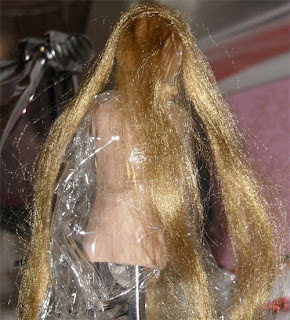 ...and ended up with a doll who has alopecia. This was also the first time I took the hair out of the package that I was able to smooth it ....and never again.
Once I brushed back the hair, it looked like a doll with a cap on. 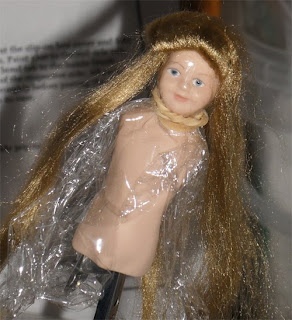 I was afraid to tie the hair back with a ribbon; so I loosely braided it. ....very crookedly as you can see, meaning to fix it the next morning. 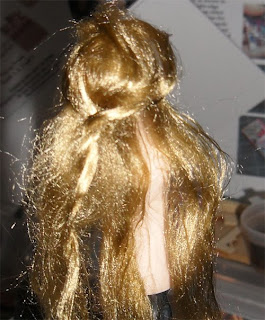 Now all this time I had kept my doll under wraps because I figured right from the start that I wasn't going to be a superstar in the wigging world over night. I have a hard time styling my own hair!
Of course since glue doesn't stick to plastic wrap, the next morning I couldn't continue. My wig wouldn't sit on the wrapped head but I couldn't get it to sit properly on the bare head either. Thus ended my first wigging disaster ...errrr .....ummm attempt. 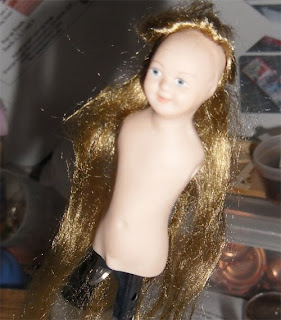 My second attempt was even more disastrous and this is my third. 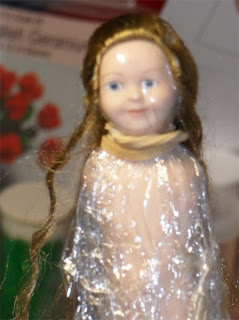 As far as I'm concerned it still looks like a cap and nowhere near anything resembling a hair style. However when I showed these photos ....only in order to properly ask questions, I was told I had passed and was now qualified to begin interim wigging. Imagine my total shock & amazement when I read that! What... that poor effort got me a pass??? I would have rated it an "F" rather than a "C-". I think subconsciously I must have expected to have to create a Louis XIV wig.
Take a tip from me: do NOT wig a doll at the same spot where you work with clay! I thought I had cleaned but every time I sit down to clay now, I'm finding blond viscose...
Posted by Karin F. at 8:00 PM