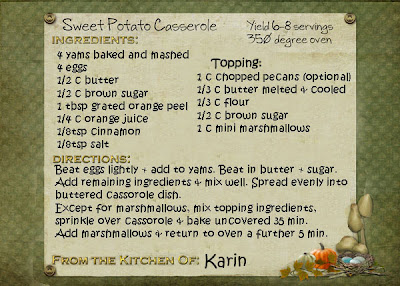 I recently asked my friend, Frank about his favorite dessert and he promptly told me it was sweet potato pie topped with marshmallows. Apparently it's known as "Soul Food" in the Southern US and although Frank isn't black, he does hail from Missouri.

Here in Canada, yams aka sweet potatoes are just becoming popular mainly because of pre-packaged foods coming across the border. I can't ever remember having ever eaten one but I had heard they're very healthy. When I googled them, the first thing I learned is that yams and sweet potatoes are actually two different vegetables.

Up here we call them yams but in much of the States they're known as sweet potato and surprisingly there are quite a few different types grown throughout the world; the yams sold in our grocery stores are the orange fleshed, reddish-brownish-orangish skinned sweet potatoes masquerading as yams. They’re even more common than the standard sweet potato, sweeter, and containing a healthy starch that's great for a diabetic diet.

Now you might be wondering what all this has to do with miniatures and dollhouses!

I've long been in the habit of buying a real life food to get my clay just the right color when miniaturizing and so having googled my fill of recipes (for the ingredients) and photos of sweet potato pies (so I'd know how they looked), I set off to the local store to buy a few yams. 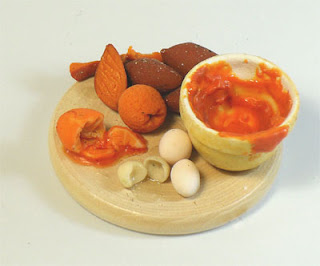 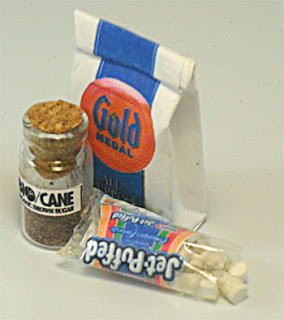 Once you've figured out your clay, what then, do you do with whatever you've brought home? Last year I bought at least 8 different types of squash but never had the desire to taste any of them....mostly because I'm not a very experimental cook and luckily I have a large composite bin.

This time, however, I was determined to do better and since I had to roast at least one yam so I could see if the baked changed color from the raw, I decided to find out whether they tasted as good as everyone claimed. I mashed my roasted yams with some butter and maple syrup and served them that night for supper. My husband, who categorically hates all vegetables and especially those he's never tried, pulled a face but surprisingly ate the rest without another complaint. My first taste made me realize why: they taste really good! I've even bought some more to mash and take to a Christmas potluck dinner.

So Frank, thank you... for "forcing" me out of my comfort zone!
For anyone else out there, who's not quite sure this is the right type of dish for them. Try it out on your dollshouse people first: 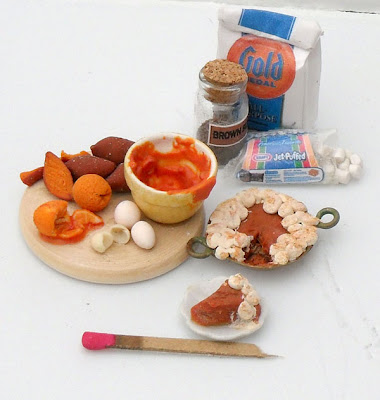 I have three more preps, available in my Etsy store.
Posted by Karin F. at 6:44 AM