Here's a bit of Thanksgiving history from the Canadian point of view....

While Americans begin gearing up for Thanksgiving in the days following Halloween, Thanksgiving celebrations in Canada are long since over by October 31st.
That's because here in Canada, Thanksgiving is celebrated on the second Monday in October. This is, in fact, our Thanksgiving weekend coming up! 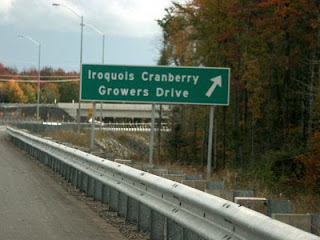 Unlike Americans, whose holiday recalls the Pilgrims landing in America, our Thanksgiving traditions began by giving thanks for a successful harvest, which typically ends by early October and traces its roots to an old European farming custom of banding together to toast a plentiful harvest.

Thanks to Ontario Protestant church leaders who in the mid 1800s decided to turn Thanksgiving into a nationalistic, religious event. They felt that particularly after Confederation, it was their moral and historical duty to shape the Canadian identity in the Christian mould and saw the adoption of the Thanksgiving holiday as a way to do this.

They successfully lobbied the Canadian government to create Canada's first, national Thanksgiving in 1859. But it was only proclaimed sporadically in the ensuing years, as church, state and commerce each wrestled for control of the holiday. By the 1870s, holiday traditions, such as family gatherings for turkey dinner and stories of American pilgrims, took hold in Canada.

The Protestant clergy lost exclusive control of Thanksgiving Day when in 1908 the government appointed Thanksgiving to a Monday rather than a Thursday. Transportation companies had asked for the change, feeling that a long weekend would increase holiday travel. Churches opposed the move, fearing that it would hurt church attendance, as it did!

In 1957, Parliament passed legislation to make Thanksgiving an annual holiday celebrated on the second Monday of October, eliminating the need for annual proclamations.

Our Thanksgiving meal is similar to the feast served at the American counterpart: turkey (although ham or other roasts may be substituted), gravy, stuffing, autumn vegetables and fruit desserts...especially pumpkin pie! In some homes a cornucopia is placed at the center of the table; the cornucopia is a curved ram's horn filled with fruits and grains....harking back to the successful harvest tradition.

THANKSGIVING IN CANADA
In 1710 at Port Royal, N.S. a day of thanksgiving was held when the town passed into English hands for the last time.

In 1760 a day of thanksgiving was held in Halifax to mark the victory of General Amherst's troops at Montreal.

In 1762 Halifax held a day of thanksgiving for a bountiful harvest.

After World War I it was combined with Armistice Day for some years.

Here turkey, turkey, turkey!
Turkeys are able to adapt to a wide variety of habitats. However, most turkeys are found in hardwood forests with grassy areas.
The best time to see a turkey is on a warm clear day or in a light rain.

They what?
Turkeys have heart attacks. When the Air Force was conducting test runs and breaking the sound barrier, fields of turkeys would drop dead.
Turkeys can drown if they look up when it is raining.

Eat, sleep, gobble
Turkeys spend the night in trees. They fly to their roosts around sunset.
Turkeys fly to the ground at first light and feed until mid-morning. Feeding resumes in mid-afternoon.
Gobbling starts before sunrise and can continue through most of the morning.

Eyes in the backs of their heads?
A wild turkey has excellent vision and hearing. Their field of vision is about 270 degrees. This is the main reason they continue to elude some hunters.

And they're fast, too!
A spooked turkey can run at speeds up to 32 kilometres (20 mph) per hour. They can also burst into flight approaching speeds between 88 kilometres per hour (50-55 mph) in a matter of seconds.
Posted by Karin F. at 9:42 AM