Once upon a time: Part III

....in our last episode, the owners had just gotten their house back. Fortunately the tenants had not only moved out of the house by midnight of the day their eviction called for but had actually taken all the filled garbage bags that were seen by the side of the garage throughout their last month of tenancy.

The owners gave themselves one month to get the house back into a shape where they could put it up for sale & reasonably expect someone to buy it. But before they could start, they had to remove all the original building materials that the tenants had taken down ...all of which was stored in the cold cellar located underneath the front porch. Nowhere did they find any sign of the supposed mold! However, what they did find was a seat from a car and a baggie with some tobacco(?) remnants in it. All of the materials filled a large trailer and off it went to the dump. Now they could get to work.
But wait... during a lunch break taken on the front porch, they spotted a hash pipe on top of the hydro meter. Hmmmmm stranger & stranger....

By the end of the month that they had given themselves, there was still lots to do. 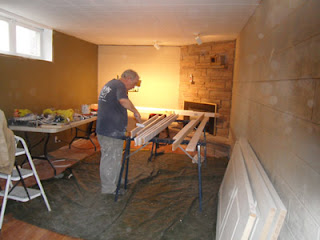 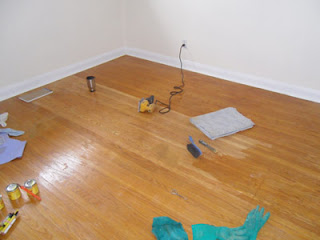 Some of the updates to the house were normal such as having painters come in; parts of the hardwood floor needed stripping. Some were not: walls had to be rebuilt, ceramic floors finished off and everywhere doors along with their frames added. But most of their contractor's time was spent changing electrical wiring so that for instance, the light switch for the walk-in closet was no longer 3 rooms away.
Then there were the surprises such as the electrical outlet located directly below the bathtub.... 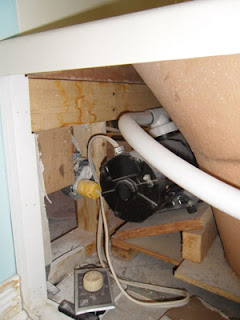 In the end it took almost 7 weeks before they were done. They'd had to spend much more than what the tenant asked for in his invoice. But finally they could get their lives back instead of spending 7 days/week fixing, cleaning or acting as builder's helpers.

So, as we come to the point in all stories that reads: "and they lived happily ever after", in our story there are still questions to be answered:
1. Will the sales price reflect all their hard work?
2. With the housing market slowing down again, will they get an offer & sell?

I hope you enjoyed my little story! For course, you realize that because of libel laws, all characters in this story were entirely fictional!
I have a bathroom tile reglazer coming in tomorrow but after that, it's back to minis and boy, am I glad!
Posted by Karin F. at 6:27 PM