Well I don't know... airports and I don't just go well together!

I arrived with more than a comfortable 2 hour time frame until my actual flight but my first problem came up immediately: I never knew that you couldn't fly into the US without a destination address! Thankfully I at least had my hostess' phone number. By the time I phoned to Long Island and then ....again! went through the process of printing my boarding pass, there was a humongous queue ahead of me (people like me with ADH do not do well in lineups) and followed immediately by a pre-customs clearance line-up, 7 S-bends long.
Since we were having a sales table, I had some of my polymer items with me as carry-on and since I was being honest & declared that I was bringing approximately $100 worth of goods into the US, I had to go through an extra baggage search.
I brought out my items; the customs officer looked at them, looked at me and then down at them again and finally at me once again ...all with a very puzzled expression. Finally she waved me through with the admonition to next time not waste their time & just note I was bringing in "samples"! I should have known; I'm so very used to my friends having a glazed expression on their faces when I mention miniatures! LOL
One last check-in and finally more than an hour after arriving at the airport, I'm finally sitting in the departure lounge. So much for reading my library book that was due in 6 days.
My plane leaves at 10:55. Obviously I didn't notice the boarding time because at 10:15, I decided to take a bathroom break and see if I could get some breakfast. I, like most Ontarians, am addicted to Timmies, a coffee shop located at every street corner. However the airport Timmies was located on the other side of the walkway ...inaccessible to me! I had to make do with a coffee that was definitely past its sell by date. So the fact that I managed to spill almost half before adding the lid to my cup seemed minor.
Back in the lounge, I was just getting settled & pulling my book out when I caught part of an intercom message regarding something about LaGuardia. Naturally curious I questioned a boarding attendant who on seeing my pass, immediately got on her walkie talkie to cancel the call to remove a no-show customer's luggage. Reason: customer had arrived. ME!!!
This is not the first time I have had this sort of thing happen to me. Once in San Torini, needing to take just one more photo, I missed the launch to take me back to my cruise ship that had sailed without me & that was just at the edge of the horizon by the time I got to the harbor. I had to be ferried aboard my ship by a Russian cruiseship launch.
11:05 and we are in the air. It always amazes me when I see Toronto from the air. The city stretches as far as the eye can see; from the ground it never seems quite so large.
By 11:15 we are already crossing the Fingerlakes region of New York state and within an hour, the plane is flying above the Empire State building and Ellis Island, made famous as a historical immigration check point. Then to my delight, the plane made a full U-turn and I got to see the other half of the city: the Brooklyn Bridge and Liberty Island, among others. I'd been to NYC several times before but have never flown in; it's marvelous to have that bird's eye view.
My hostess Fran & her son picked me up and dropped me at their house, leaving immediately again for another airport run ...this time to JFK airport. 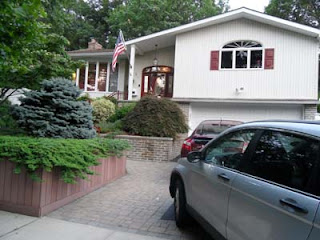 There would be 14 of us, coming in from France, Mexico, Canada, Belgium, Utah, Maryland, Wisconsin & Florida to name just a few. Amazing when you think how far the internet has brought us! 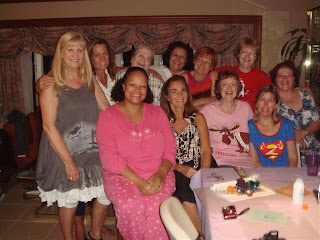 We spent the rest of Friday chatting & getting acquainted. 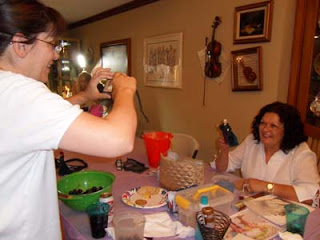 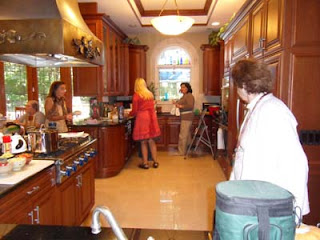 Since we were such a large group, it was decided that 4 of us would stay overnight with Caroline who lived just an hours drive from Manhattan aka downtown New York City... 15 minutes from Fran's house. Long Island is only 120 miles long with Manhattan at one end and the famous Hamptons at the other end. Until now I had only ever been in Manhattan. It amazed me to be driven within minutes to the beautiful rural country side of Locust Valley in Nassau County. 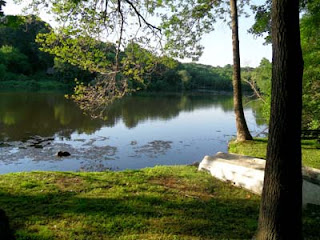 (this is a view from the rear of Caroline's yard.)
Now remember until then I'm just a dumb Canadian hick who thinks of the entire island as being New York city. I was totally flummoxed! Caroline lives in a subdivision where the minimum lot size is 5 acres. Oh my, you should have seen the house! 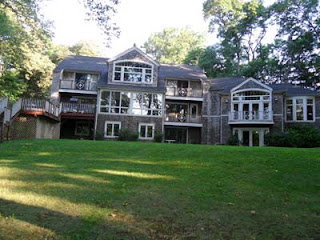 (my bedroom is at the top left)
I could have and actually did get lost between my bedroom and the bathroom. Caroline's ensuite bathroom is larger than my bathroom and 2 bedrooms combined. She calls it living in the woods!! This was the view from my bedroom balcony: 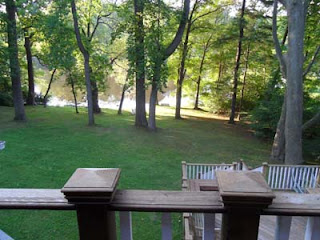 After that the remainder of my stay was anticlimactic but well worth any hassles. Natalie was a wonderful teacher. We did the Halloween Goodies table with her on Saturday and dressed & wigged our witches with Helena on Sunday. Both ladies made everything come together so easily, I could almost imagine that I was a long time doll maker. 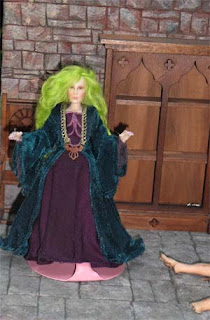 Can't show you my table as I still haven't finished but (famous last words!!) I will have them done by Halloween!
In between doing our projects the wine flowed over-abundantly and the food would have satisfied a small army! I came home weighing an extra 4 lbs.
Since I wasn't due to depart until mid afternoon on Monday, I got to do a tiny bit of shopping, coming home with a light weight notebook to add to my existing inventory of two already(still) working laptops and a new appreciation that Japanese sushi means more than just California rolls.
Of course where would I be without a final airport saga. My plane sat on the tarmac for over an hour ...most of which time had to be spent sitting in a totally uncomfortable upright seat. But at least my luggage arrived back home with me unlike one of our group who was only flying back to Florida.
When I landed at Pearson International at 8pm, it was like walking into a steam bath. Long Island may have the same temperature as Toronto but they have nowhere near the same humidity!

To Fran and Marvin, a big thank you for opening your home to a bunch of strangers so we could become friends. To Marvin for working your fingers to the bone, being a wonderful chef. To Caroline for taking home four bedless waifs & making them feel extremely comfortable. To Natalie & Helena for your patience & for extending your knowledge. 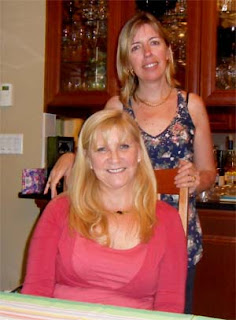 Of course last but not least, a huge thank you to Dana, of whom I would have liked to have seen more (nudge nudge wink wink) and who organized the entire workshop. 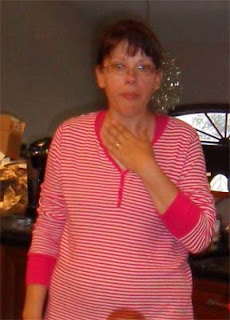 I wouldn't have missed this for the world!
Posted by Karin F. at 9:39 AM