I always love to read comments that are left for me. Here's what Cate, of Solet Luna Studios wrote about my mouse:

Oh Karin what a great idea! And I think your sculpt is coming along beautifully...but I just melted when I saw that sweet little ratty face! That is a ratty...a dear little dumbo-eared, black-eyed, pearl-coloured and possibly rex-coated ratty! :D But you can keep calling him a mouse if you like. ;)
(as you can tell...I have quite alot of affection for these wee little rodents...!) :D
Can't wait to see how he develops!

This from someone who dresses their pug up as a pirate! LOL Luna, on the other hand....
Now Cate, as a fellow Canadian, you should know how prejudiced the rest of the world is or how long it takes minorities to become recognised. Excuse me while I just pat myself on the back...
I mean afterall,I'm a woman of the world; I know what's what! I've watched Ratatouille twice....at least once all the way thru without falling asleep... a major feat for me! Think about how much trouble that poor little rodent chef had just because someone called him a rat. Had he been a mouse it would have all been so much easier. At the very least, it would have meant less time spent under a chef's hat worn by someone else.
Rat conjures up rat-fink, rat-arsed.....but mouse inspires the words: innocent, cute, quiet. Besides now that it's flocked no one can really tell. It actually looks better than what you can see in the photo: 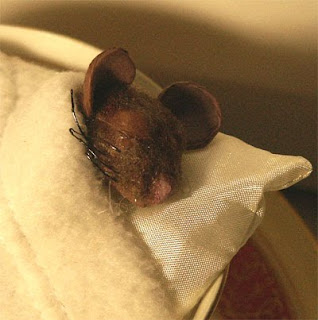 This is my first flocking. I began with a bit of trepidation since I really didn't want to have to pollute the lake if all went wrong. If nothing else the geese would never forgive me. 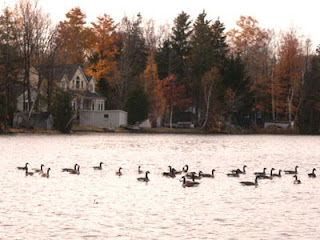 When I first started, I wondered how I would get the fur to fall properly but once I started cutting, it was all I could do, not to see Ara's dryer lint monster

So as you can see, my rat errr I mean mouse needs no french-english dictionary or culinary talent 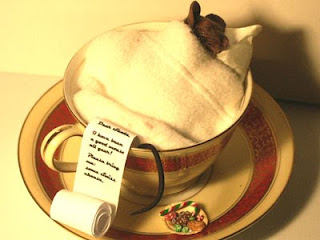 to complete the phrase: "not a creature was stirring, not even a rat errr ummm mouse.

Now getting back to Cate's pirate pug....I happened to be in the pet shop on Saturday to order some new jammies for Luna. Here's what she looked like when her current PJs were new: 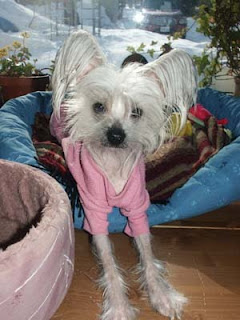 I ordered red & pink long johns and the cutest little yellow flannels. No way could I ever get her to be seen in public dressed as a pirate. She's insisting on changing her name to Martina Navratilova when she goes out Sat night in her tennis whites.
Posted by Karin F. at 4:54 PM