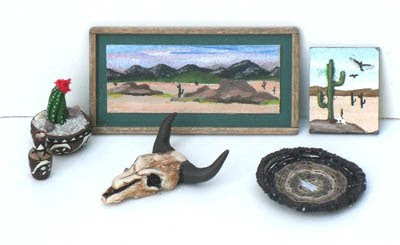 As I'm sure to have mentioned, I belong to the AllThingsMini forum; not only are some great miniaturists to be found there but the swap items are generally fantastic and widely varied!
I enjoy themed swaps since it encourages you try something different and I really don't mind making more than one of the same items. Sometimes I'm even lucky enough to be in a swap where I can use items I'm currently working on.
Although the southwestern swap had the least participants of any I've had in some time, the quality of the items was absolutely fabulous.
The steer skull actually had teeth on the under side, just like the real thing would have; both paintings are 3 dimensional and the tray really well done. Thanks so much Christina and Cate. 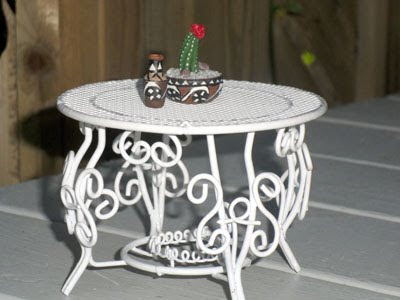 Just an update: my items were the terracotta painted vase and the potted cactus.
Although I'd made extra cacti; I only had enough vases to cover the swap. When one person dropped out of the swap at the last moment, I received one of mine back. Carrying everything to put away, the vase fell ...rolled under my foot; I stepped down.....
Maybe I can use the shards in a potting bench scene. I obviously wasn't meant to have it as a vase.
The cacti are listed on my For Sale page, if anyone's interested.

Next swap is this month; the theme this time is "Around the World Travels". I keep changing my mind about what to make....
Posted by Karin F. at 1:07 PM