I think I briefly mentioned all the goodies we received at lunches and dinners. Well in addition to those, we had an auction with the most incredible things: a blue 4-story lighted castle built to be a dragon repository that came complete with dragons; a set of 1:24th Henry Tudor & Ann Bolyne dolls as well as the item I wanted to bid on: a gorgeous needlepoint wall hanging stitched on 44ct silk gauze. It wasn't quite finished in time for the auction so was to be mailed, blocked and backed, to the winning bidder. 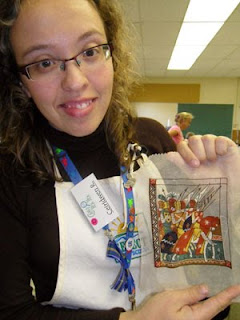 This is Ceridwen holding her masterpiece. Can you imagine she was actually able to stitch in the car with her mum driving to camp! What a pleasure it was to meet her & her sister and sit next to her mum during the workshop.
The wall hanging went for $250 ....unfortunately very much above my budget. But what a wonderful thing to be able to hang in your castle!!! 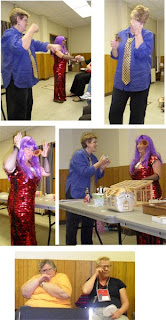 This photo collage was taken during bidding on a commode chair. The auctioneer and his lovely assistant "Vanna" who really should have been wearing a platinum blond wig since she played her role so well as someone dense as a post. Both Susan (auctioneer) and Kelly (Vanna) kept us all in stitches during the entire auction.
In addition to this auction there was a silent auction as well. Between both auctions, more than $2,000 was raised to defer the costs of next years workshop.

The dress up dinner was on Monday. Theme obviously was medieval with sandals & socks as the mandatory dress items. However it was never specified where they had to be worn; so if they didn't show up on our feet, they were worn as earrings, on a hat, on a dress as well as a dress: 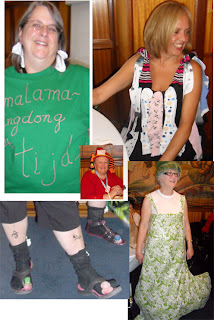 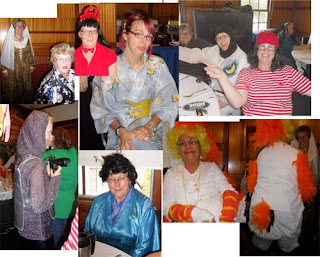 There were several geishas, one knight dressed in chain mail and another in white battle regalia, a devil (guess they had them back them too LOL), Maid Marian ...there was even a duck, which apparently is Janie's modem of attire every year. I came as an Sherwood Forest oak tree with a crown of leaves, leaf bracelets and necklace. I never know what to wear on those kind of occasions.

In addition to our castle workshop, a number of us also signed up for the silversmith class where we made axes and pikes as well as silver shields. 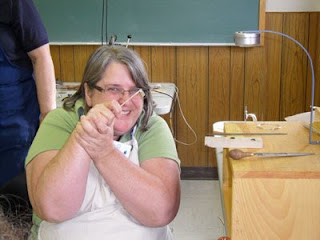 Here's Pam showing what her castle character, Axel the chief executioner, would do with his ax. I managed to make an extra ax and pike out of the scraps of my silver but forgot to have the silver Hallmark stamped into any of them.
Posted by Karin F. at 9:32 AM