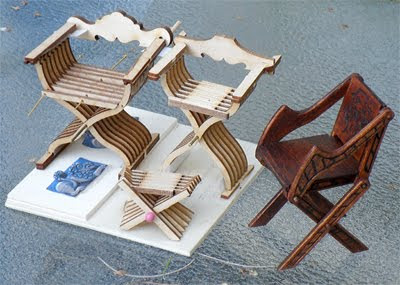 From what I've read, life in the Middle Ages meant a transient lifestyle due in part to volatile conditions and in the case of the nobility, to widely scattered land holdings that needed supervision. Rather than have enough furniture for each residence, much of the lighter furnishings was transported on these moves. Heavier items such as beds or tables were left behind but chairs which symbolized the importance of a person, were often taken.

The Glastonbury chair was known to exist since the early Middle Ages and is thought to be based on a chair made for Richard Whiting, the last Abbot of Glastonbury, England. Although often referred to as a "folding" chair, these chairs didn't actually fold, they dismantled.

The other type of chair was known as a Savonarola or X chair, so named for their crossed legs. They apparently originated in Egypt and were used throughout the Roman Empire. By the Middle Ages when chairs were used by kings and high ranking church officials, the X structure became a symbol of authority.
The Savonarola chair, named for a 15th century Dominican cleric, is distinctive for the elaborate curve of the X. Due to their solid wood construction, these chairs were not only sturdy but comfortable.
Funny enough Henry Tudor did furniture makers a disservice in dissolving the monasteries. It was monastic groups as well as the guilds who were instrumental not only in maintaining high standards of workmanship but also influencing the form and ornamentation of the furniture. Spires of Gothic cathedrals were the model for furniture finials, while circular tracery was made to resemble the rose windows of architecture. With the decline of high religious devotion in England, 15th century architecture grew simpler. At the same time in France it grew more complex.

Before delving into my medieval research, I'd never heard of either of them. These photos show the first prototypes made from plans that I found for the originals. They'll still require some changes, on the whole I'm quite happy with them. They're certainly better than most that I've seen on the market. 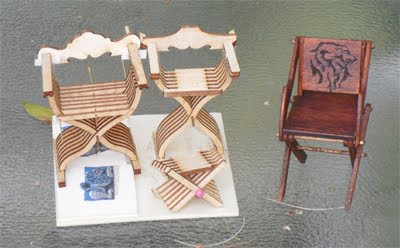 The Glastonbury chair on the far right also represents my first attempts at wood carving. The first chair back that I carved was meant to show a lion but when I had finished with it, it looked more like a pigs head on a lions body. I'm slowly learning that less means more, on areas one inch square or less.
Posted by Karin F. at 9:20 AM