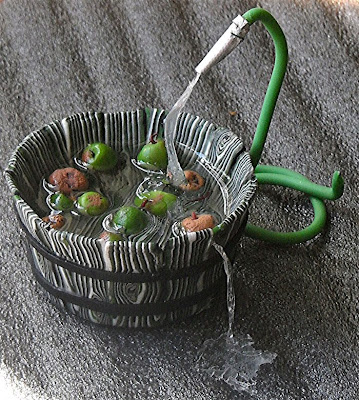 Doc Patty (MiniaturesFromClay) & I have been having a conversation about using my CDHM entry in my tutorial. It took another member on the list to point out that by showing my creation, I was in effect disqualifying myself.
I re-read the rules & sure enough that's what I'd done. I've written to CDHM to take my entry out of the running. Here in part is their response to me:

Thank you for letting us know. Yes that would disqualify you for participating with that entry. You still have time to submit another though.

que sera sera! I neither have time nor inclination to make another. I doubt that I even made the tub for them. It had been something I wanted to make; their contest just came along at the same time.

Here's a link to an article that I recently read:

Kathleen Dustin's thoughts on artists struggles
When you read it, you'll know why I'm not that upset about being disqualified. Kathleen wrote about making your work personal. She ends by saying:

I'm actually feeling right now like all those years of making "stuff" in the end is just that - "stuff". I'm feeling like king Solomon right now when he said in Ecclesiastes, "Vanity of vanities, all is vanity and chasing after the wind". I want to still make stuff, but is it just a job to make money? Who cares in the end? I want to still make my work personal, but am struggling with how to do that right now. I am feeling the meaninglessness of worldly striving.

Getting lauded by people is mere vanity. I much prefer the personal satisfaction from seeing something I made & being proud of it ...sanctimonious twit that I am LOL
Posted by Karin F. at 10:17 AM