I am so proud of my country!!

We got 14 gold medals...the most of all the countries competing.....including hockey gold! 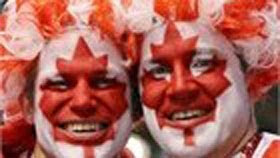 Sidney Crosby scored the winning goal 7:40 minutes into overtime as we won the Olympic title tonight, beating the United States 3-2 to become the first host nation to capture men's hockey gold in 30 years!

Yonge Street, recognized as the longest street in the world, with a length of 1900km or 1,178 miles -- roughly the distance from San Diego, California, to Seattle, Washington was partly closed out by cheering crowds.