Late Wednesday evening, I felt like I'd just finished creating the world! ...totally exhilarated and exhausted at the same time ...especially considering that it took a lot longer than six days, more like over a month. So just to recap:
The top shows what the kit looks like with the additional building 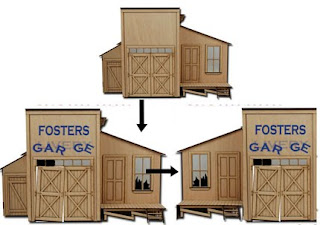 ...and my thought process of turning this into a 20s garage is pictured below it.
Chelle told me, I should have known better since I live on the shores of a lake and should have immediately thought: fish hut/boathouse. But you know how it is when you get an idea in your head. After I started building and looked at it, it just cried out to be a run-down, old-time shack by the water with an attached boathouse.
Weathered wood was created using spackling, wire brushed and stained with an ink/alcohol mixture. After that I did some drybrushing to achieve a really old wood look that's been in the wet a little too long. 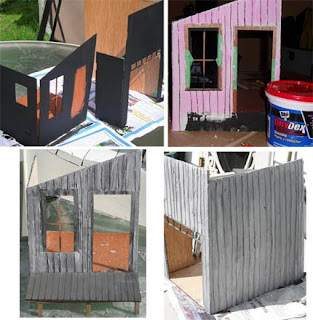 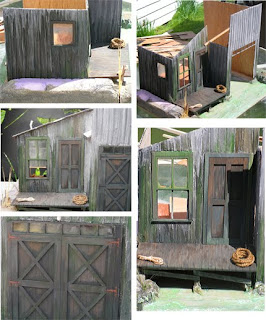 The building was raised up using foamcore to allow "water" and "waves" to flow underneath the dock and into the boathouse. Both sides of the buildings are foamcore carved into "stone" and "rocks", painted, planted and the remainder covered with beach sand from our lake. The waterside reeds are bristles from a Dollar Store broom. 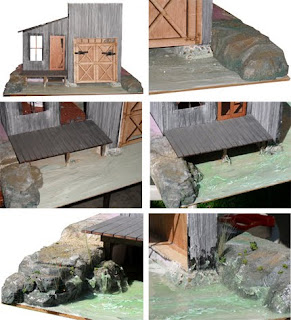 I had more trouble with that darn water! Having added acrylic paint to my resin, I discovered that the two would NOT mix; of course being cheap & not wanting to waste the last of the resin mixture, I spooned it on, only to discover that you can make fantastic looking, flowing waves that way. I just wasn't able to "swish" my resin until it hardened into waves...maybe next time! Surf and wave caps are saran wrap covered in resin.
I worked outside; Easy Cast resin takes a long time to harden and until it does, it becomes tacky all over again in the sun and the heat! At one point, while holding down a portion of the roof, I accidentally set my elbow down & pulled up a portion of the resin....
The roof is corrugated cardboard that was gessoed and painted to resemble an old tin roof. The chimney pipe is the cardboard portion of a heavy duty wire coat hanger, covered with the foil from a coffee can seal. Some of the wire became the sign hanger and the light fixture pipe above the boathouse door. 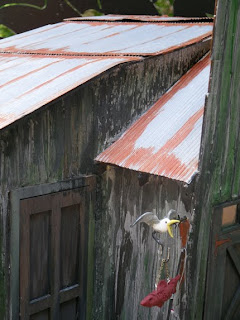 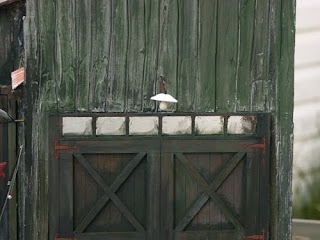 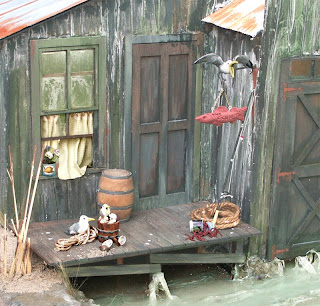 The only things not made by me are the flowers in the window, the barrel and the wooden pail. In the pail are tiny clams that I beachcombed from our
lake.
The 3 seagulls are thanks to an idea given to me by Leslie from About.com; the fishing rod is thanks to an idea from Doreen Playter.
The worms in the can, the sign, seagulls and the light fixture incl
lightbulb are fimo clay.
I must have taken a million photos.... It ended up as an all day process: shoot a bunch of photos; download to the laptop; look at them; discover something I didn't like about each one; go back outside & start the process all over again. I wish I had a camera that showed white objects and dark objects equally well in one photo! Of course it didn't help that most of the day was "ueber"bright.
The next issue was the contest entry email with the 3 photos. I held my finger over the send button so often; chickened out, sent it to myself, made sure that everything was OK, put Greenleaf's email address back.....
But you don't want know all that; you want to see the finished Fish Hut, right? 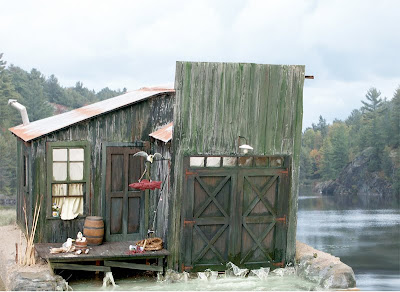 Wish me luck! The Greenleaf contest asked for 3 only! photos and is based on
originality. In addition a 2nd contest from miniatures.com piggybacks onto this one but doesn't close until July 4th. So that'll give me time to finish the insides and then enter again.
Posted by Karin F. at 9:23 AM