I've been looking forward to a particular auction ever since I'd heard about it, 3 months ago. The only drawback? It was held several hundreds of kilometers away in Fort Erie ...down by Buffalo NY. What else to do but turn it into a day trip.
It's amazing what can be seen when you drive on country roads rather than taking the big highway. I'm not too sure what this walkathon was in aid of: in amongst them were 2 Catholic priests fully dressed in their long black cassocks. The temperature at noon was beyond belief and I was thankful for the car's air conditioning. So to imagine someone wearing all black and walking in that heat.... 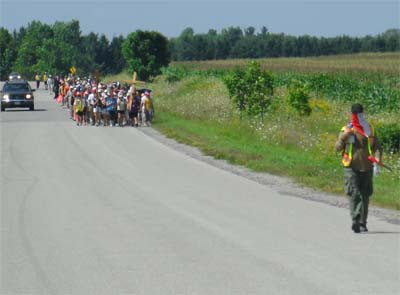 Several crosses and a flower wreath were carried in front and there were two traffic wardens making sure of the walkers safety. I thought nothing of it until I passed the first warden who used what looked like a Canadian flag to cover his face. 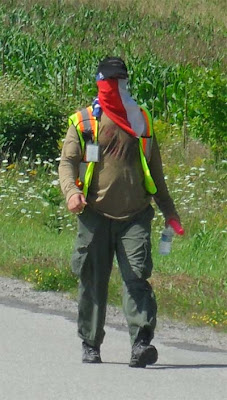 The auction was held at Bertie Hall, right by the shore of the Niagara River; built in 1830 by a man active in the underground railroad that smuggled black runaway slaves into Canada and although thought to contain hidden passages and a tunnel running from the basement to the river bank, I never saw any of it. Almost every room was filled with auction items so we must have spent several hours just looking. It was only preview day as I had no intention of buying. I did however want to see everything before it all disappeared into private hands. 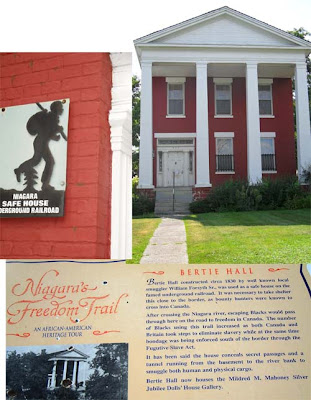 And of course since we were so close to the US border, I thought a little cross border shopping was in order. It used to be that when you crossed into Buffalo, you passed immediately into the worst neighborhood but the city is a far cry from the one it once was. 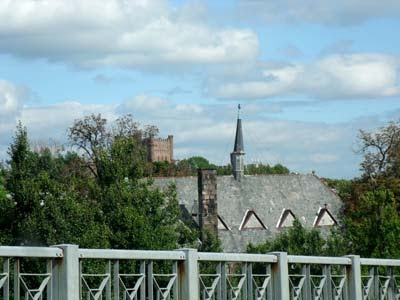 I spent some time at Hobby Lobby and would have gone to more craft shops except that Luna was waiting in the car and Ken having endured looking at auction items in which he had no interest, now had to traipse after me, through aisles that he had no interest in, when all he wanted was some dinner.
So after quickly finding a restaurant, we were off again, having booked our hotel room in Niagara Falls Canada before we left that morning and we still had a ways to go.

Both border crossings were tediously slow and although I had brought a letter from my vet showing Luna to be up-to-date with all shots, no one ever questioned me about her. I should mention that she is a dog who'd been given away at 9 months of age because she was supposedly too nervous to handle new situations! The only times she stirred were to tell us she was thirsty or when we drove past a take-out window. No matter the type of fast food drive-thru, Luna immediately assumes there are Timbits (donut holes) being handed out.
Poor Ken having sweated bullets when we crossed back into Canada with two bags of illegal (for Ontario) weed and feed lawn fertilizer....we are no longer allowed chemical herbicides, now had to worry about bringing Luna, safely snuggled in her carrier bag past hotel reception. Not all hotels allow pets and we just didn't ask.
Michaels at the Falls is located just past the border crossing and within walking distance of the falls. You can imagine our surprise when we opened the door to be confronted with a 'Gone With the Wind' room including a red heart shaped tub. But then afterall, Niagara Falls has long been traditionally known as the honeymoon capital. 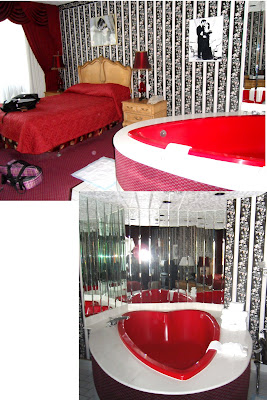 This was the view from our balcony. Just behind the bridge connecting us with the States, you can see the first of the falls: 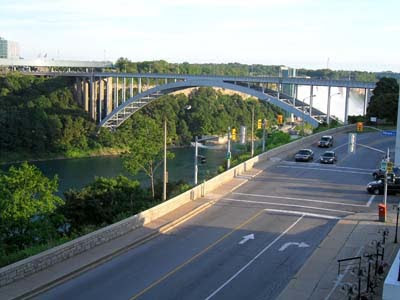 There's lots to do if you've bored with the falls: Ripley's Believe it or Not, Mme Tussuad wax museum, Hersey's Chocolate museum, the Falls Casino, the needle topped Skylon with it's skyhigh restaurant; crowds are everywhere! 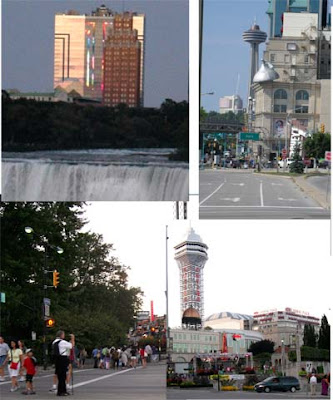 There are actually several water falls: in this photo the one on the left is the American Falls. 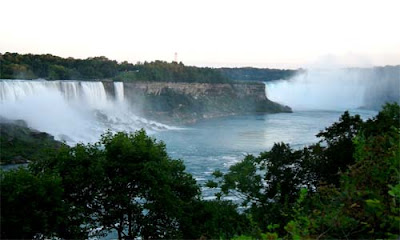 I heard a comment, obviously from a first timer who thought them disappointing and small and I will admit to not remembering that there's so much rubble at the bottom but theirs is the one where you can actually walk right up to the side. 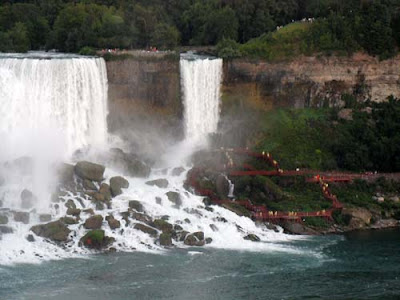 The Horseshoe Falls are entirely on our side, semicircular as their name implies and at least twice as large. 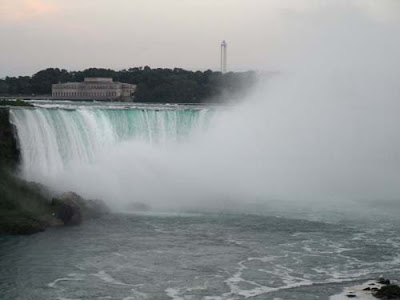 As I child I remember going through a tunnel that leads to a small observation area located in the midst of the falls. I also remember going for a ride on the Maid of the Mist, a boat that navigates the current below the falls. Seems really small when seen from above. 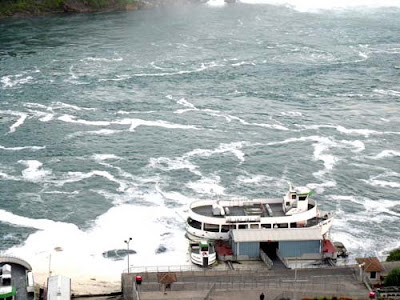 Having strolled the strip we returned to our room for a lovely soak in our Jacuzzi. Afterall what else was there to do; with no WiFi and very few TV channels, we just had to pretend to be newlyweds. ;-)
The next morning when I looked out, traffic crossing into the States was already backed up right across the bridge. 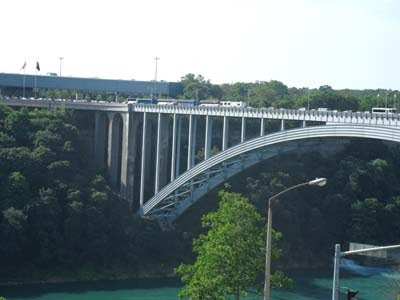 On our way home we stopped at a local antique market where I took photos of a ship that has long been a landmark seen from the highway. 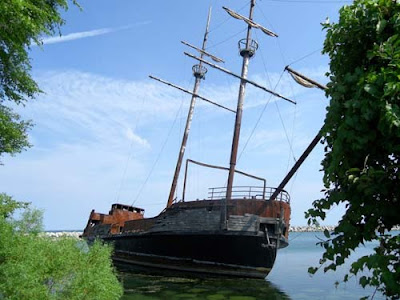 Although most of the wood has rotted away, the rest while being incredibly rusty still had some sails.
This last photo is of beaches along some of the as yet unspoiled portions of Lake Ontario 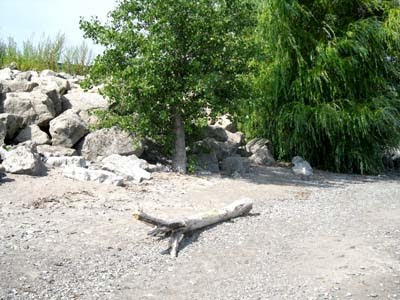 I'll show you the lovely old dollhouses and salesmens samples being auctioned at the Mildred Mahoney dollhouse museum next time.