Having won two tickets to the Antique Steam Engine & Tractor Show from a local radio show, we spend an enjoyable day driving over to Paisley to see what we thought would be a 2 hour drive each way & maybe at most an hour to wander around the show looking at antique farm equipment. Neither one of us is greatly interested in farm implements but an outing is an outing after all!
We have a GPS that constantly shows us new & intriguing roads which we'd otherwise have turned our noses up at. It's still a new enough toy for us to delight in. Today it took us on a 6km concession road that was wide enough for a single car....we saw only one farm lane. No houses. No other cars. Definitely no people. If it hadn't been for the road signs I would have sworn it was a private road.
We stopped at Walters Falls to look at the old mill: 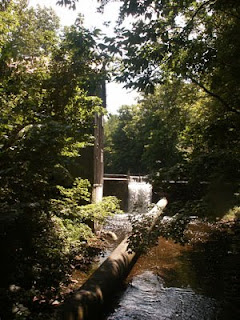 An inn & spa had been built right next to it. Looked very nice so of course I got some of their brochures as we often take mini vacations and this place would make a great get-away during fall color season.
Between off-the-beaten-track sight-seeing and a road closure, we drove our GPS crazy. We think of it as "her highness" because of its classy English voice. (Do you ever wonder what voices the British hear from theirs?)
Poor Ken despaired of ever seeing paved roads again but eventually we made it. Probably not all the exhibitors were there ....but neither were the crowds. We caught a horse drawn wagon, one of several that were constantly circling the entire show and hopped off again at the far end where we wandered around an exhibit of cutters and buggies. 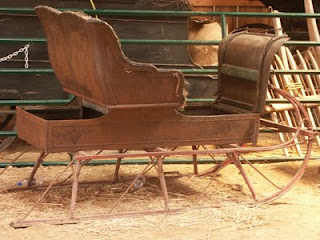 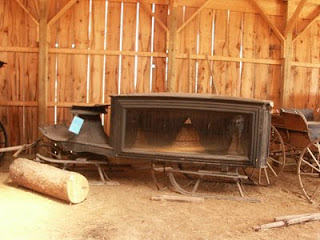 Among them were a glass sided hearse, a hearse/sleigh and a sleigh with an enclosed box in which to carry the coffin. Looking at them makes you realize the seasonal hardships that our ancestors must have endured.
We watched a 1920s steam shovel load soil into a truck of the same era. 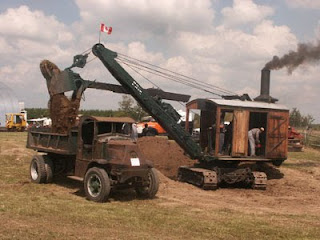 Had it been all tractors and such, I doubt we would have stayed as long as we did. We spent some time talking with a man who'd spent more than 20 years collecting toy trucks. I discovered a simple little tool used to wind rope (and got a demonstation) as well as some miniature 1920s gas pumps. Unfortunately the scale was 1:25 but I have the company's name so will write & ask if they make them in a 1:12 scale as well.(I'd still like to recreate a 1920s general store & gas station scene) We stayed a while to listen to some fiddle music...country & western, of course. Before we knew it, a couple of hours had gone by. I would have loved to have photographed some of the retired farmers. The craggy faces beneath western hats or John Deere caps would have made for interesting study.
Her Highness took us home on a different route, and I found a house shell that could make a great Halloween scene. Can't you imagine it at night with maybe an eerie green light rising up out of it? 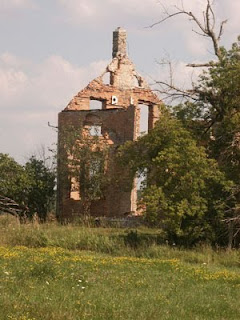 We stopped for supper in Singhampton at a restaurant that had originally been a hotel & livery stable in the 1890s. The walls were covered in photographs of the hotel in its heyday and the people of the time. Although the livery stable is long gone, the hotel still looks pretty much the same. 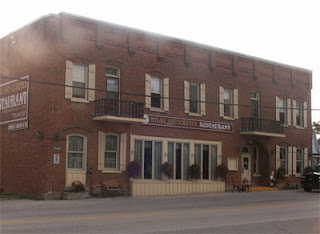 We got home just in time to watch the sun set over Orr Lake and have another fish take Ken's last worm off the hook.
Posted by Karin F. at 10:58 PM