I am so pleased & proud as punch to introduce my first born to you.
Born last week and weighing in at next to nothing.
I have not measured but believe it to be slightly over an inch in length.
It was originally destined for a silent charity auction as part of a vignette. 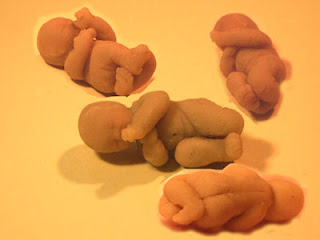 This photo is a composite; so what you're seeing is only one baby.....and yes, I should have put a penny in the photo with it! I will also NOT! photograph using yellow paper as a background again....sorry.
I used a face mold but the rest is all my own handiwork. 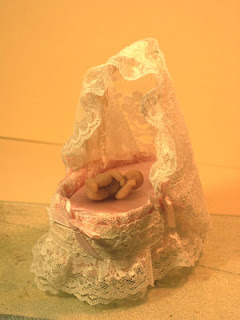 I imagine every mother would say that her baby is the cutest; I'd like to think that I'm not one of them and so to be honest.....entre nous, of course!....it could be a little cuter but at least it came out all the same color. There have been two miscarriages that were the wrong color if you know what I mean: 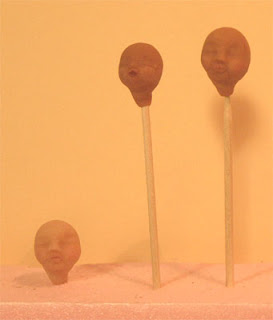 (Apparently SuperSculpy bakes at half the length of time that the regular sculpy does.)

I've looked everywhere locally but am unable to find either Pupperfimo or Prosculpt. I did finally manage to get some Prosculpt on eBay; unfortunately the price went up by $4 at the last moment.....just don't ask about shipping costs!!!! And I may try a sampler of the puppernfimo.
I've since been told that supersculpy is prone to moonies (I was lucky not to have had that problem) and I really do not find the "skin texture" to be realistic enough to suit me. Kim...as baby is gender neutral...is too small to polish but I may try some wax just to see if that makes a difference.
BTW: it took 3 days to realize that Kim was born without ears! So I guess it's a keeper afterall. Bet you didn't notice either, did you?
Posted by Karin F. at 7:58 AM