So now that the Baby Shower swap is over, I have another one coming up. It's got a Halloween theme of "And it came up from the basement". Ara, who thought it up, has 2 blogs. One is about the Addams Family and the other is a murder mystery blog entitled Clue: Murder at Bentley Manor.
So anyway, I've already told you about all that. There'll be 6 of us, including Ara. What I didn't know until yesterday, was who I'd be making my thingie for.....ta da, it's going to be Jodi. This is one talented lady so I'd better be up to doing my best. Just to show you the type of stuff she does: 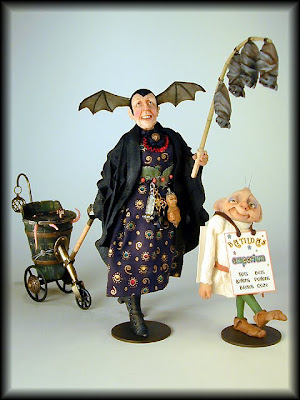 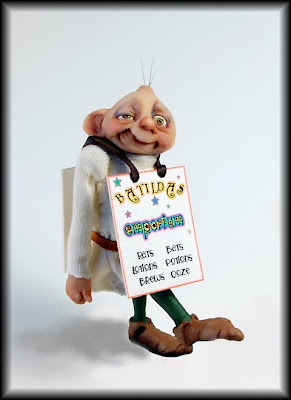 Jodi recently put the little fella on eBay for $50. You know what a pain it can be if you're trying to sell there. Everybody wants to buy as cheaply as possible....including me, teehee. I've watched some really well done artisan figures take forever to sell & then with only one bid or so. This little guy sold with 18 bids for $1250!! Take a look at some of the other things that she & her husband Richard have made.

.....I think I already know what to make. I'll give you a hint: everything that comes from the basement doesn't have to be scary! Sometimes things get put there because of a lack of storage upstairs. Then they get forgotten.....

Oh and speaking of forgotten things.... the balcony vignette. I haven't started but I've found the cutest lawn chair...can't you see it with some nice thick cushions...rainproof of course LOL 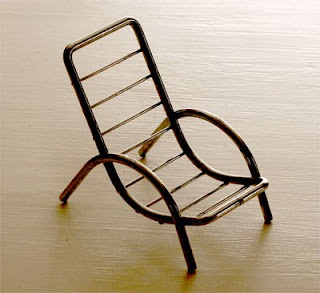 Of all places, I found it at the Goodwill near my moms house. She's all moved now and luckily for me since I did the packing, my daughter has taken on the job of unpacking. And they say no good deed goes unrewarded.
Posted by Karin F. at 10:58 AM