Here's the answers for last weeks' quiz ....coming to you late thanks to the changes in the CDHM tutorial rules which means that I now have to follow it live, a big fruit tree sale at a local nursery, and a lovely steak dinner at Kelsey's...

1. Canada is home to the world's largest island in a freshwater lake. This island itself has 108 freshwater lakes. In what body of water is it and what's the name of the island?
Manitoulin Island in Lake Huron

2. Canada has one-tenth of the world's forests but a population of only 3.4 people per square kilometer. About 5.5 million people live in Canada's largest city. In what province is it located.
Ontario

3. The longest street in the world is 1896 km long; it starts at Lake Ontario and ends at the Minnesota's border. Name the town it starts in.
Toronto
Apparently I was using old information; the correct version should have been:
Now Wiki states that "Changes in provincial responsibility separated the now locally-funded and controlled Yonge Street from Highway 11 during the 1990s. As a result, Highway 11 does not start until Crown Hill just outside of Barrie, several kilometres north of where the name "Yonge Street" ends. The Guinness Book of World Records no longer lists Yonge as the longest street in the world, citing instead the Pan-American Highway as the world's longest "motorable road"."
I stand corrected; thanks, Doreen.

4. Canada has the fifth largest island on earth, more than double the size of the UK but slightly smaller than France. Name it.
Baffin Island has a land mass of 507,451 square km.
Some of you thought it might be Newfoundland, the largest of Canada's island provinces. The island of Newfoundland at 111,390 square km, is only 1-3/4 the size of Great Britain.

BONUS QUESTION: If you went into a Timmies, wearing a toque, would you be able to get poutine or a double-double?
Toque is a typical Canadian word meaning a knitted, brimless, closefitting cap wore in winter and has nothing to do with the question.
Poutine is a Canadian dish consisting of french fries topped with fresh cheese curds and covered with brown gravy and good for at least a million calories. It's served at many fast food places but not coffee shops....
There is at least one Timmies ...or Tim Horton coffee shop, located in every town but particularly so in Ontario, where they're located almost on every street corner.

A double-double is a coffee taken with double milk and double sugar.

The bucket of clams & the seagull are flying off to Wasaga Beach where they will reside with Doreen Playter.

Susan Hale gets the fishing rod & the trout even though her answer about Santa is not fully correct. Apparently our immigration minister has "officially" given Santa honorary citizenship with full Canadian fly over rights. If it wasn't Santa, you'd hear me grumble about illegal aliens jumping the immigration queue yet again!

Zona Ray will have to make do with the sand pail & the sandcastle but it's all good as she informed me that she'd be happy with any of the three.

Special prize of a fishing rod & fish goes to Gary Sokol for being so persistent about getting his answers right ....he tells me he even stayed up until 5:30am looking for answers.
Not sure I believe you Gary LOL

And this is what Toronto, the Good, looked like today 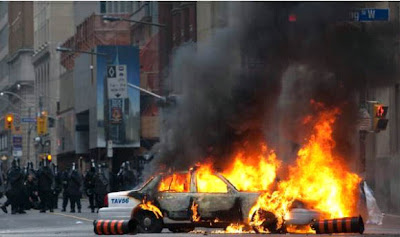 Since we're hosting the G20 Summit, we have had thousands of protesters setting police cars on fire and breaking Starbucks windows; they've protested everything from the seal hunt to the emptiness of their own wallets.
Posted by Karin F. at 9:49 PM