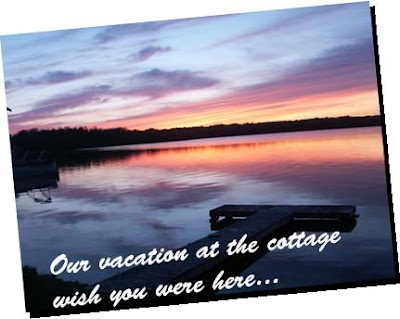 I really wanted to take part in this swap but I also have a swap at AllThingsMini that's due at the same time. So I'm taking the easy way out. No fuss, muss or imagination needed: I chose to go to the cottage.
I live in "cottage country" on the shores of Orr Lake. I don't vacation in the summer; I'm already here!
Until recently I thought everyone knew what a cottage was. But apparently in other parts of the country, it's referred to as "going to the cabin". Canada has more lakes than any other country in the world so it stands to reason that we build our cottages at a lakeside.

So come along while I try and explain cottage life:
We start Friday after work. Everyone piles into their car & drives several hours in heavy bumper to bumper traffic. The later you leave, the heavier the traffic.
Cottage life doesn't just include a cottage. Depending on the amount of money you earn, you might be arriving with your tent or camper at a Provincial park, a trailer park (camper vans only) or a traditional cottage.
This is a 2 season cottage: 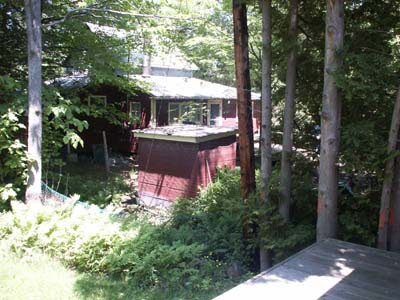 It was probably built in the 1930/40s. There's no insulation and the outside is finished in "insul-brick", a type of pretend brick made of the same material as roofing asphalt shingles. There's an indoor toilet but you need to bathe in the lake. Your heat comes from a wood stove. There is no TV, internet or phone unless you bring your mobile.
These are also cottages: 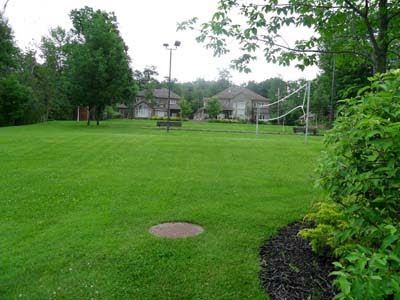 Just past the volleyball net, is their soccer pitch complete with goal posts & lights. The house on the left has it's own traditional pizza oven on the patio. Although these houses have all the amenities, they're usually not used more than a few times during the summer. The reason I know so much about them: between the two is us. We live in a small house, nothing fancy ...and obviously our lawn isn't maintained weekly by a gardener. 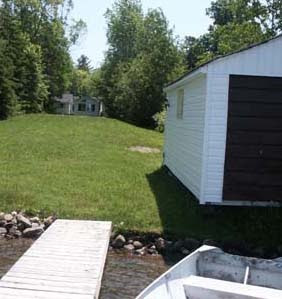 When I was a child, my parents' cottage was so isolated that you could only get there by boat ...after a 3 hour drive. We live 5 minutes from the nearest village, 10 minutes from a major highway, yet during the week, we almost have the lake to ourselves.

So if the weather holds on the weekend, you have your choice of any number of water sports; fishing ...the lake contains bass and perch, two very good tasting fish! Because Orr Lake is so small (2-1/2 km x 1-1/2km) and so shallow (13 ft at it's deepest), the water temperature warms very early in the season. Great for swimming! Or you could just sit at the end of the dock and watch the world go by. 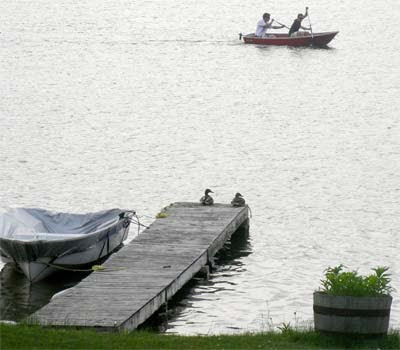 Then in the evening, you can sit under a canopy of stars, in front of a roaring fire, 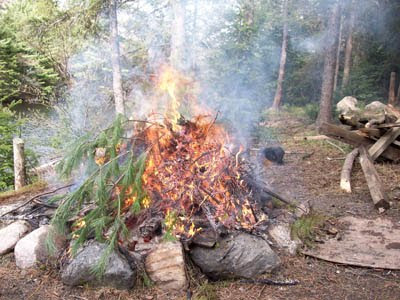 toast marshmallows or wieners, tell ghost stories or just stare into the flames.
Then on Sunday, you do it all over again except instead of building a fire, you get to pile into your car again for the long trek home. But this time, the later you leave, the lighter the traffic. 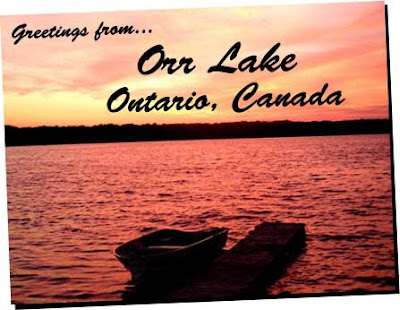 BTW Caterina's swap rules are: make a relevant container and fill with 2 items from your vacation. Swap ends on July 14th.
My vacation memories are going to Norma, who I believe lives in England and I will receive mine all the way from Rotterdam Holland from Maria. Here's what she wrote:

Hello,
I am not going on a vacation this year, but maybe we go to the zoo and the swimming pool and a couple of concerts; I can make some mini's about that or mini's typical for Holland.(that's were I live)
Greetings and a big hug
Maria

I'd love to receive some typical Dutch things. I'll keep my fingers crossed that that's what I get.
Posted by Karin F. at 9:20 PM