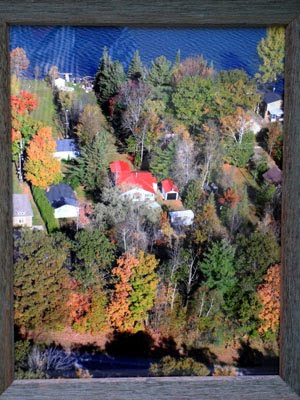 Our house is the one with the red roof, taken last October.

Ever since I posted about living in cottage country, I've been getting envious comments and yes, it is idyllic ...most of the time! Now let me tell all you city slickers, the down side of living in the country:

Friday:
Having tidied my house, I spent some time watering my plants but must not have completely turn the outside water tap off when my daughter and three grandkids came for the weekend. Some time later, my oldest granddaughter asked: "How do you flush your toilet, Nan?"
Guess I'd run my pump dry. We have a drilled well that I've been told is over 100ft deep. No way should we run out!

Saturday:
I woke up to my pump still running and the water reservoir empty. After frantic phone calls to friends in the area, who might know of a good local plumber; fruitless calls ...then more calls to plumbers located from the phone book, getting only their answering services but no call back, I turned off the electricity to the pump and within 1-1/2 hours we again had running water. Problem solved! ...or so I thought. The plumber was cancelled and we had a lovely rest of the morning by the lake, a late lunch and then off we went to the Science Center.
That evening, we ate our supper around a blazing campfire. When my grandson first came here, he was an absolute fiend about campfires. At the advanced age of 17, he has become a little more circumspect but deep down I don't think he's outgrown his fascination. It was lovely to sit there. Everything was enveloped in a velvety darkness with only the fairy lights around the gazebo and the house lights in the distance disturbing the night. Well, they didn't disturb it for long. At about 10 pm, the only lights remaining lit were the ones powered by solar panels! We had an outage!!
We trooped in after the fire died down with the kids thinking it creepy to walk around in a blackness so intense that you couldn't see the person standing in front of you until you ran into them ...literally LOL.
My grandson discovered that the ice cube maker on the fridge doesn't work without hydro power and didn't see why I wouldn't have a backup reserve in the form of ice cube trays! I didn't tell him about the container of fridge made ice ...there wasn't any water to have with it anyway!
And they all discovered the wonderful brightness given off by old fashioned oil lamps ...of which we've had a good supply ever since we were without hydro power for three days during the severe ice storm 2 years ago. They also discovered why a hundred years ago, people used to go to bed with the dusk and get up with the dawn. There's just not that much to do!

Sunday:
We went to the local bakery. Everyone knows of our bakery ....including the tourists driving through town! You need to go there early to get a good selection. Things just don't last.
Then I took everyone to the local fruit & vegg market. When the kids are up visiting we would go every Thursday and Sunday and they would each get a dollar bag of candy. My daughter being slightly older was enthralled for an entirely different reason: sales bargains! Along with fresh produce, you can find used books, antiques, selected salamis and kielbasas at the open air "butchers", clothes. You name it; they sell it.
Back home again we feasted on spicy salami, ham kielbasa, goat cheese and fresh potato bread followed by sweet red cherries and even sweeter pastries. A meal fit for a king especially since we ate down by the lake. Then they went off for a canoe ride while I laid back for a well deserved nap. The rest of the day was spent swimming and suntanning and all too soon they had to leave for home and I to do a huge laundry load of towels.
Guess what!
I got my laundry done but that was the last time I had running water.
Today I've phoned the plumber before 8am. It's now after 2 pm and I'm told someone should be out by about 3!! My Monday was supposed to be filled with an exhilarating afternoon on a sail boat with a friend followed by a meal at one of the best steakhouses in Collingwood. So far I've had to cancel my sailing date! How much do you want to bet I'll miss my dinner plans....
If plumbers were medics, there'd be turkey vultures flying overhead!!!! 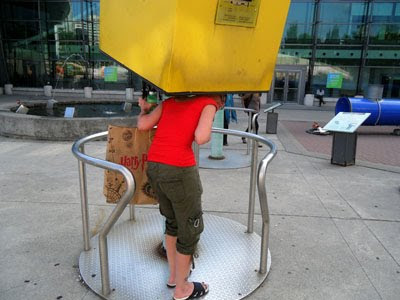 The Ontario Science Center is a hands-on place for kids of all ages. There are... 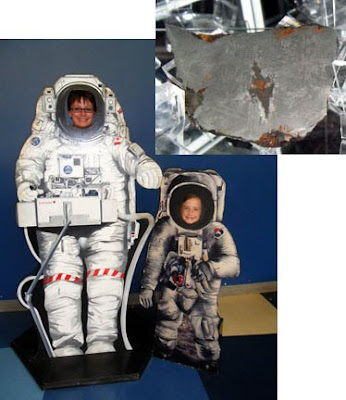 pretend astronaut suits to stand behind and moon rocks to look at.... 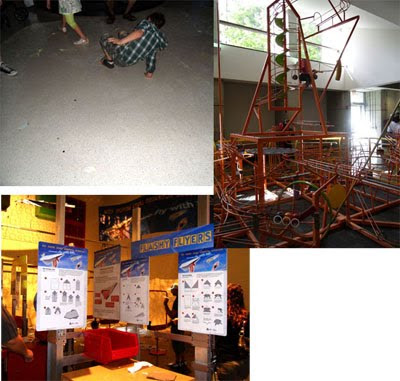 water images with goldfish swimming ever more frantically, the more you walk on it and disappearing when you photograph them, perpetual motion machines where you have to literally push the little tykes aside for a chance to play, a shoe making area filled exclusively with "big" kids, a paper plane making area totally littered with discarded paper airplanes and so much more!
...and then there's the reason we came: 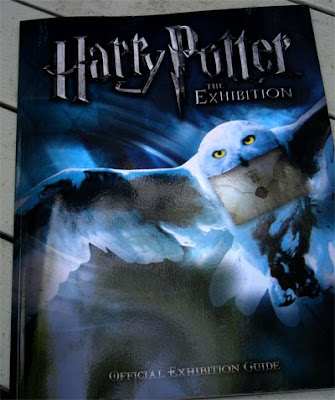 Unfortunately no cameras allowed! But everything we saw is shown in the book.
Aren't these cool! I've got some great ideas for Halloween swaps 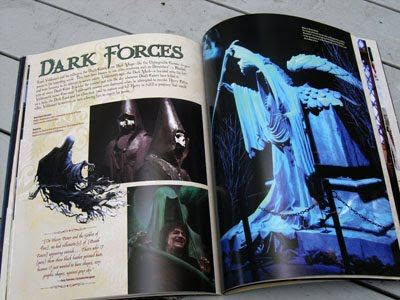 I pulled a squealing mandrake out of the pot... 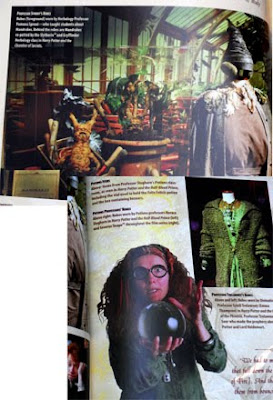 I sat in Hadrid's chair 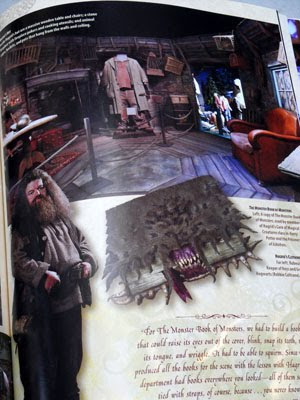 ...and three more people could have comfortably fit in with me. The rest of the photos were taken from the gift shop.
Quidditch robes and broomstick... 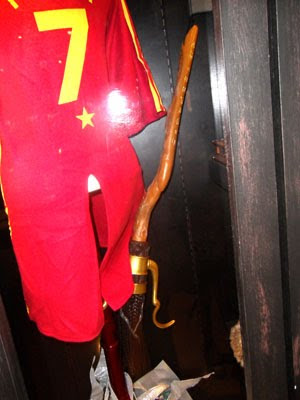 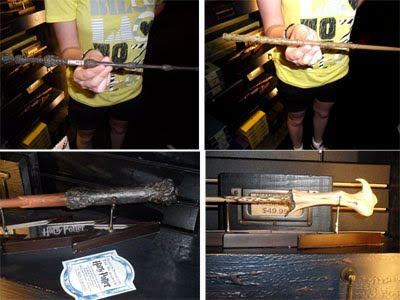 ...don't look at the price tag. That was one of the cheaper items.
The flying Ford Anglia car was by the entrance. 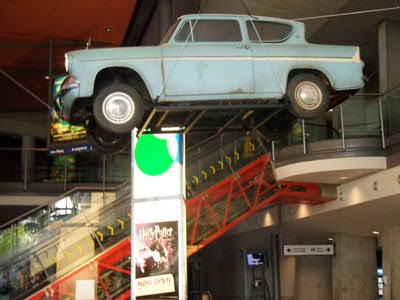 There was truly magic all around: 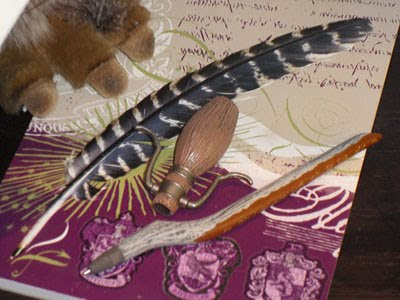 I instantly turned into the bestest, ever Nana in THE world when I agreed to buy some special ink in a bottle and a writing quill.
And magically all the fudge flies flew away and disappeared never to be seen again. I'm not opening the chocolate frog package in case they come hopping straight out at me! 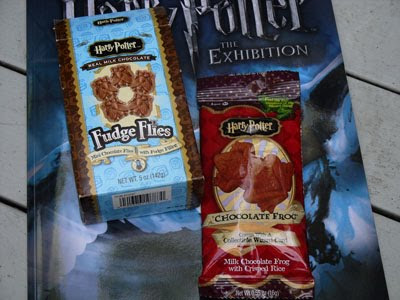 On the way home, the kids amused themselves by feeding us "Bertie Bott's Every Flavor Beans". I got smart very quickly, eating only half and feeding the other half to my daughter. I'm sure we were the talk of the Don Valley Parkway; I know we got lots of laughter and a few stares from passing cars, at the faces that my daughter pulled. We ate pepper beans, cheese beans ....old smelly, long past expiry date cheese!, onion beans, gravy flavored beans, yuck!, truly disgusting, long dead! fish flavored beans. We had a blast!
Posted by Karin F. at 11:35 AM