I'll start with the easiest first ....and that's the boat house: 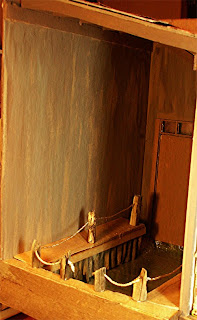 I used twigs to build up the moorings and the posts; Ken is forever cleaning up our beach ...just amazing just how much driftwood we find. Well, for once it came in handy! 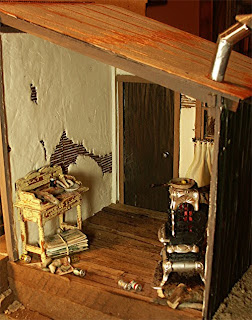 I wanted my walls to reflect the age and condition of the house, so I chose a "broken plaster" look using air drying paper clay. My clay was at least a year old, not exactly dry but ...close to it. I used a marble rolling pin to roll it out, just like cookie dough. Since I tried to keep the clay thin, it was sometimes difficult not to have it tear, lifting it off the tile. Brushing the underside of the clay with a watered down white glue makes it adhere to the plywood walls which I'd gessoed to avoid warping. You have to be careful about air bubbles but other than that, this is such an easy and quick way to finish walls.
Add a little water to your finger to smooth any joints; I purposely allowed the torn edges to form gaps so I could imitate broken plaster. Unlike most people, I covered my walls first with the clay and added the "lathe" after. Before the invention of drywall, builders would nail small strips of wood called lathe between the wall studdings and then cover them with plaster. Hence the term "plaster and lathe" ...which I'm sure you've heard of.
Our one furniture making company in town has a bin out front that they regularly fill with scraps of wood. Free for the taking! Most of the wood is of varying thicknesses and roughness. There are usually lots of veneer thin strips and that's what I used for my lathe and my floor boards. 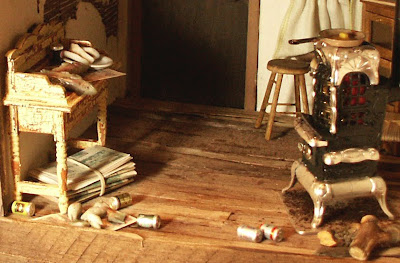 The dresser is something I found in my stash; it had originally been stained a rich maple then overlaid with a RL size crackle effect. I'm not sure where I got it but it looked so fake! Nothing that a little bit of scrapping and sanding couldn't fix. Two "freshly caught" fish and 2 fish fillets on a plate sit on the dresser; the heads and fins are on the newspaper laying on the floor and yes, there's also a few cans rolling around.
The stove is a Chrysnbon kit with some missing parts that should have been thrown away long ago. Since the lost pieces were black, I merely cut some black foam to fit. Hard to tell the difference, even close up.
There's a rusted enamel frying pan with melting fimo butter on top of the stove. 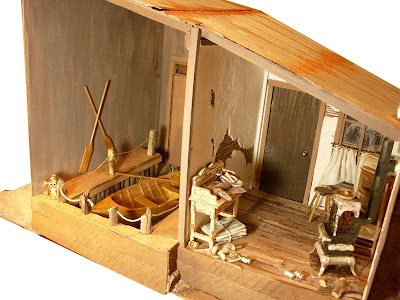 Almost 2 weeks ago I managed to win a wooden row boat and a metal diving helmet on eBay UK. They arrived in the nick of time!
It was all finished, photographed and my entry sent to miniatures.com on Thursday!
I wasn't going to do this post until I could give a link to my entry and ask all of you to vote for me but apparently the people in charge of the website are too busy. They did however assure me that they'd "get around to it when time permitted".
So instead I'm going to pretend that I'd actually won the Facebook competition ....because that's how I feel!
All your comments have kept me going, when I felt I like quitting.
Dale sent me some lovely archival fish pictures, which I didn't get to use.
Doreen mentioned that she wasn't going to vote until she saw my entry.
I could go on and on. So thank you! I feel like such a winner and it's all due to you guys!


I'm going to take a few days of well earned rest. Ken's off to Edmonton for a couple of weeks, so I thought I'd do some cross border mini shopping just to see what they have that we don't. And while I'm in the area I'll visit the dollhouse museum in Fort Erie. I promise to take my camera; hopefully they'll let me take photos.
Posted by Karin F. at 9:40 PM