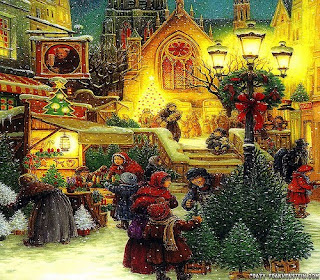 Isn't that a gorgeous picture!

"Christkindlmarket" or "Weihnachtsmarkt" usually held in the market square, is associated with the celebration of Christmas during the four weeks of Advent and originated in Germany and Alsace in the Late Middle Ages. The Vienna "December market" actually dates back to 1294.

From what I understand, the religious reformer Martin Luther began the tradition of Christmas present giving. Before Luther, the exchange of Christmas presents took place on the Saint Day of St. Nicholas (December 6). Luther, having 12 children, would tell them that on Christ's birthday the Christ child (Christkindl) rewarded good children with presents. The Christkindl, a romantic, fairy-like being, dressed in white and gold, with golden hair topped by a golden crown became a forerunner of Santa Claus.
When I was small, I set my shoes ...polished! outside my bedroom door & during the night St. Nicholas would fill them with fruit and candy. Then at Christmas, Santa Claus would magically fly through a window (we had no chimney) and bring me toys.

Popular attractions at the market include a nativity scene crèche, Zwetschenmännchen (figures made of decorated dried plums), carved nutcrackers, angel pyramids, traditional Christmas cookies such as Lebkuchen, a type of soft gingerbread, toys, books, Christmas tree decorations and ornaments.
Traditionally the most famous of the wooden Christmas ornaments were made in the Erzgebirge region of Germany which although originally a mining area, saw a decrease of those types of jobs beginning in the 16th century. Because the mountainous region was also rich in natural resources, a new tradition of wood carving began and here is where the first carved nutcrackers were made.

I have long wanted to build an old fashioned Christkindl market stall. It's going to be my next project.
Posted by Karin F. at 7:15 AM