Today I've had the best April Fools joke played on me ....ever!
I could have sworn that just over a week ago (March 21) it was still winter! That should mean that it's only spring now. But the joke's on me ...because today although some snow still lingers in shady areas, we're already in the middle of summer!
We actually reached a high of 25C....77F!!! Pinch me but if I'm dreaming it's one heck of a great dream! 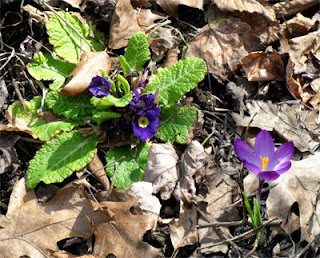 Those are my first bloomers. Everything else has only just started popping up out of the ground.
We had the first water skier out on the lake ....in full body wetsuit, of course. Ken spent the day getting our dock set up again. Even tho he was wearing chest waders, he had to come onto shore frequently to warm up. I should have started on my ATM "Old Santa Fe" swap or the Spring Fling garage. Instead I sat and soaked up the sun.
I expect that this weekend, we'll be inundated with neighbors opening up their cottages. Although I don't really begrudge them, it's so nice when our lake belongs only to the handful of people who live here year round.
I never realized that only in southern Ontario do we cottage. Even elsewhere in Canada, people go to "the cabin" or "the camp". (Apparently in England, cottaging is slang for a gay man's rendezvous in a public park toilet!)
The word "cottage" comes from the medieval word "cotter" meaning a serf who lived in a tiny drafty structure, relieved himself in a pit and barbecued a lot. And that's what it used to mean when people originally bought cottages. Not any more!
Now everyone wants the same comforts on the weekend that they have thru the week. On one side of us, we have one of those original cottages. No insulation; a wood stove for heat but at least they do have an indoor toilet. On the other side, stand three multi-million dollar homes er...cottages. The funny thing is the little rustic cottage is used more frequently than those big monstrosities.
I hear that in Britain, cool rainy weather is predicted for the weekend and my girlfriend in Germany tells me that "weather here is lousy today, again quite a cold wind blowing".
I wish you all a lovely sunny and warm weekend whether you "cottage" or not!
Posted by Karin F. at 7:40 PM