Some of my friends knew I'd attended the annual Gathering last weekend & have been asking how it went, so I thought I'd just post.

I'd priced the Tom Bishop show in Chicago. Between flight, hotel & workshop it was way out of my league so instead I opted for the 2 day Gathering that this year was hosted by the Ottawa Miniatures Club & held at the Travelodge hotel....and boy am I ever glad I went!

Round trip in driving time was 10-1/2 hours....longer to get there than back; guess the GPS found a better way home while I was at the hotel having fun. I'm no slouch when it comes to speeding. I explained to my friend Chelle, that Canadians are allowed a leeway of 10 to 20 km above the posted limit but because I used all the backroads I went waaaaaay over that... I won't scare you by saying how much exactly!

Most of the distance between here and Ottawa is extremely rural and since weatherwise it's too early to open up weekend houses, I encountered very few cars during my trip. Lots of these kind of signs... 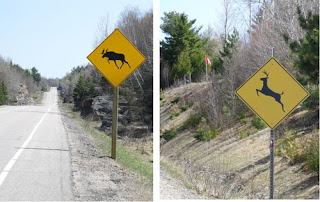 but other than a bird flying above me with a snake dangling from its claws, and a muskrat crossing the road (that I slowed down for!) I saw no deer or moose. Years ago when I used to travel northern Ontario with a friend, I'd call those the "figment" signs because as far as I was concerned they were figments of someones fertile imagination. I think maybe during a dozen trips I might have seen one moose whereas when I was a child, they used to be quite plentiful.

Moose generally come out into the open & graze by the side of the road during summer in order to escape the heat & the bugs that are hiding with them in the bush i.e. forest. Both animals are usually encountered at night. It isn't warm enough yet for them to come out of hiding....although it certainly was buggy enough in some areas.

At one point during the drive, the blackflies were hitting the windshield in such numbers that it sounded like raindrops and passing one community, I saw a lady out walking her dog wearing a mosquito netting hat over her head and shoulders.

Arriving at the hotel, I was immediately welcomed & given a tiara (my choice of either mauve or silver plastic) and a badge with my name above the printed word "debutant" but my protest about age in connection to the word debutant fell on deaf ears.

My room was lovely...as most hotel rooms are; my mattress divine and after 1/2 an hour with tech support (courtesy of the hotel) my internet connection was established so my next goal, of course, was to check the water temperature in the hot tub. Ignoring the wave pool and the humongous water slide, I settled for a leisurely soak & intimate knowledge with one of the water jets on my back.
During my entire weekend stay, the food was so extremely tasty and plentiful that I'm still afraid to get on the scales. Saturday's extravaganza entertainment was local. LOL
Friday evening each table was given a bag stuffed with fabric scraps, scissors & pins with which we were expected to create queenly/princely costumes... 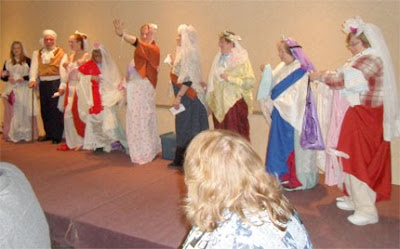 ...if you've read enough of this blog, you'll of course know that sewing is not my strong suit so I restricted myself to passing whatever was called for and murmuring words of encouragement.

The sheik (2nd from the left) won; the lady two over from him was our entrant and the "gentleman" holding up 4 fingers (indicating table 4) had the best sense of humor ....and the fastest drooping bosom of anyone I know; the lady second from the right spent the entire time "weeping" for her dead Albert. She, of course, represented Queen Victoria. 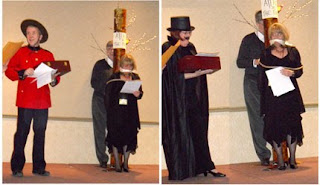 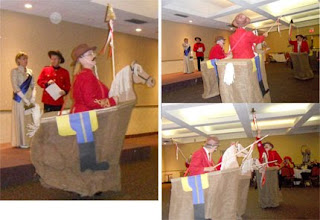 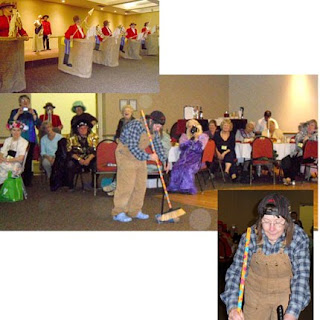 that ended as all things involving horses do ...with someone sweeping up the "horse droppings".

If this was meant to get us all loosened up, it more than succeeded! We were in constant hysterics both evenings. In addition to that, Saturday was dress-up dinner where you were expected to come queenly/princely attired... 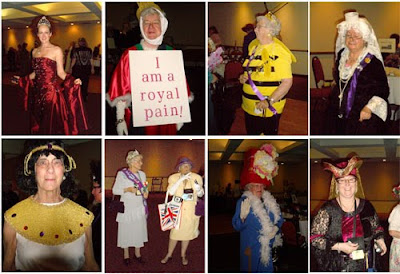 we had a royal toothache, a Queen Bee, a Queen Victoria in mourning, an aging Cleo, some minor British royalty, the Queen Mum (with the dog biscuit bucket & the giant flowers on her head) as well as many others whom my new camera decided I shouldn't capture. LOL

Being a "debutant", I hadn't brought a costume with me but I've already got my thinking cap on for next years safari themed Gathering.

My 1-1/2 day workshop ran too short as most workshops do but I still managed to bring home a 2 room castle roombox that I actually got Ken to ooh & aah over (without encouragement by me!!). Not only that but here's the other goodies that I came home with: 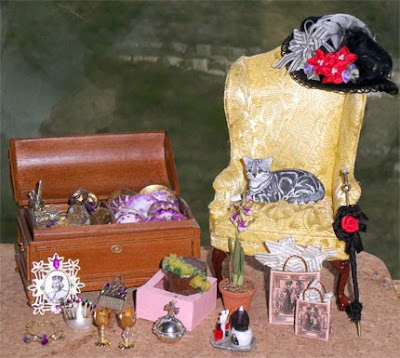 ...the only item that I bought was the little kitty....both it and the orchid were hand crafted by Karl Blindheim. (Not sure you can pick him out: Karl is the gentleman keeping the tree upright that little Nell is tied to) Everything else including the sterling silver orb was either an exchange gift, a centerpiece that I won or a table exchange. Quite a good haul I thought although being greedy as I am, I was disappointed not to have won one of the lovely items sold by drawing tickets....money went to a good cause. Oh well, there's always next year!!


....oh I almost forgot: here's the preview of what I'll be making at the workshop in Nova Scotia in September 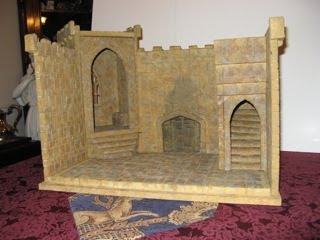 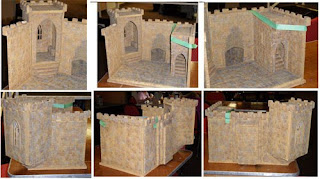