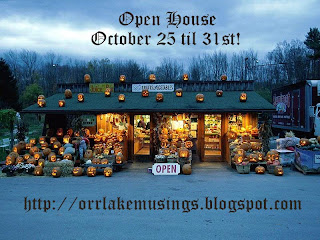 Hello come on in! Oh no, you're not the first to arrive. Janice, Margaret and Chelle are already here; Pammmmmy came all the way from Nova Scotia shhhh don't tell anyone: she's supposed to be working on her castle & I heard she hasn't even unpacked it yet!
Julia sent over a wheelbarrow full of pumpkins. Thank you Julia; they're lovely. 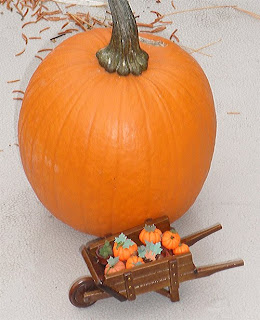 ...just follow the pumpkin trail in the garden. Lori and Ascension can show you 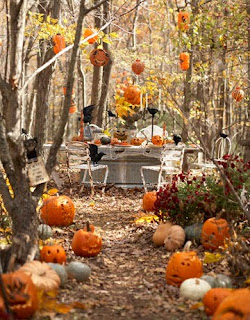 We're just carving some more pumpkins. Did you know that the tradition of using pumpkins started in America because they were cheaper than the traditional Irish turnips? I even heard that some Irish used to carve out potatoes.
Oh yeah....., it all started in Ireland. Apparently there's an Irish legend that tells of a man named Stingy Jack, who invited the Devil to have a drink. When it came time to pay, he convinced the Devil to change into a sixpence, then instead of paying for the drink Jack kept the sixpence and stored it beside a silver cross, which stopped the Devil from changing back.
Old Jack wasn't stupid! He made a deal with the Devil before letting him free so the Devil couldn't harass him. Next Halloween Jack died and was turned away from the Gates of Heaven because of his evil ways.
He went to the Gates of Hell and the Devil told him to go away since Jack had made him promise not to claim his soul. Jack didn't want to leave because it was dark and he couldn't find his way. The Devil tossed Jack a glowing coal and Jack put it inside a turnip, and ever since with this "Jack O' Lantern", Stingy jack's lonely soul has been roaming the faces of this earth.

The other story that I've heard says that October 31st is the day where the curtain separating the dead from the living is thinnest and the light from those candles ward evil spirits away from the houses.
I can't imagine carving out a potato. I have enough trouble working on a pumpkin... 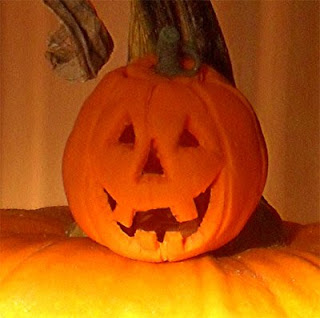 When I was a kid, we just hollowed out our pumpkins so we could burn a candle in it. You knew when people ran out of candy to give away because they'd blow the candle in the Jack-o-lantern out. 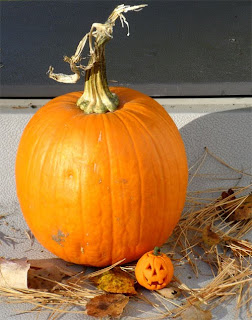 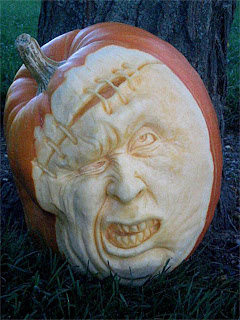 Wow. ...and he even gives you instructions so you can make your own.
http://www.villafanestudios.com/pumpkins.htm

I do have some squash if you want to try carving them... 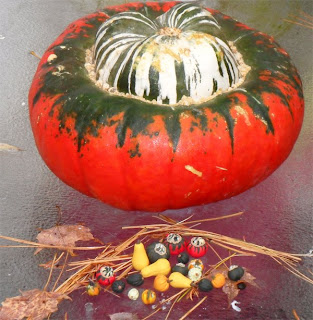 oh and please don't carve the large one. I have other plans for it.


Remember to comment to be entered in the draw for your own hollowed out pumpkin. 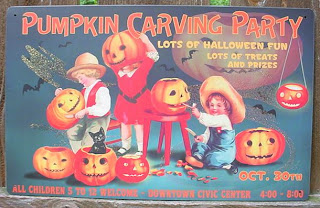