All Creatures Great and Small - Update 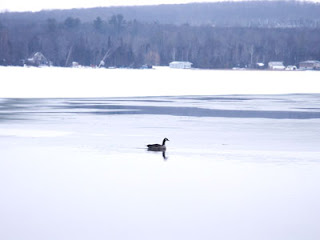 Went out for another look on Sunday:
I feel so bad for "my" goose. His duck companion appears to have left him and there he was all by himself. I added some bird seed to the cache from the other day although I'm not sure if any was eaten. I'm just glad the weather has turned mild but even so he obviously encountered ice that he needed to break thru. Can you see the trail that he's made in the icy water... 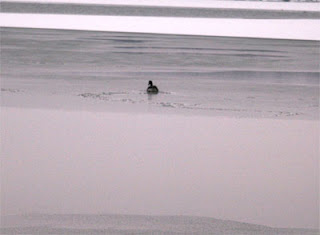 Here's some Canada goose facts that I've found while investigating how I can help him....if I needed to: Canada geese usually start migrating south when the ground begins to freeze in the fall. The trip to the wintering grounds is a quick one ...scientists have tracked geese that have flown up to 1,000 km in one day! They also think that the characteristic “v-shaped” flight of geese migrating serves two purposes. First, it creates an aerodynamic current of air along the lines of geese that makes it easier for individuals to fly. Second, it may allow for better communication and unity of the flock while in the air.
Most people only hear the trademark “honk” when geese make noise, but apparently they can communicate with as many as 13 different calls for things like greetings, warnings and contentment. They may be one of the most talkative animals after humans.
The Canada goose is a very family-oriented bird. Usually in their second year of life, they find a mate and stay together for life. But if one mate dies, the other will re-mate.
In spring and summer, geese concentrate their feeding on grasses. During fall and winter, they rely more on berries and seeds, including agricultural grains. They’re very efficient at removing kernels from dry corn cobs. They spend up to 12 hours a day feeding.....no wonder they foul so much, making them an unanticipated urban nuisance!
Their life expectancy is about 20 years
They can weight as much as 25 pounds.
Migration is a learned process.
The migratory flight range can be 2 to 3 thousand miles.
Natural predators are foxes, raccoons, owls and snapping turtles
Goslings can fly approximately 2-3 months after hatching.
During June to late July (molting season), adult geese lose wing feathers and are unable to fly.
Generally by early August all geese (except injured geese) are able to fly.


Monday morning I went down to the lake again. If "my" goose was still there I would have called the wildlife sanctuary in the hopes that they would know what to do. But the lake was empty! I'm so glad!
Posted by Karin F. at 12:54 PM