Why does Canada still have that reputation of being a land of ice & snow?

As a kid I can remember seeing people cross into Canada in August with skies attached to the car roof. When we visited my mom's American cousins, I could get away with telling their friends about how we lived in igloos and had to beware of roaming polar bears and marauding Indians.....and having to bite the inside of my cheek to keep from laughing as they stared at me in wonder.
I would have thought with the advent of computers, and CNN world coverage that Marshall Mcluhans global village had become fact. But I guess not. On one of the blogs that I read a fellow Canadian, living in Alberta, complained about the mounds of snow that they have already received. One of the comments coming from Florida, innocently asked if there was something other than snow to expect while living in Canada.

So allow me to present a few facts about my country.
The southernmost point in mainland Canada (Point Pelee) has the same latitudinal position as the northernmost counties of California.
Because Canada is so large a country and covers so many geographical locations (from sub tropical to the Arctic Circle), our weather for the same day at the same time could be rain, chinook warmth, snow blizzards as well as sunshine.

Take a moment for The Great Canadian Climate Quiz

1. In what year did a freezing rainstorm in Eastern Ontario result in ice "as thick as a person's wrist" covering wires and trees?
A: 1942 but good thinking if you mentioned the Quebec storm of 1998. 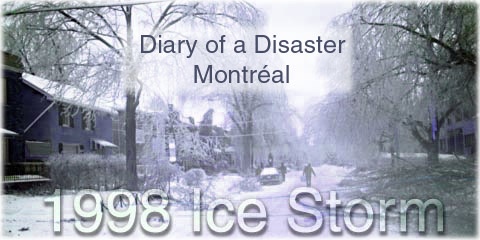 2. In what year did Toronto receive its worst single-day snowfall, when a severe winter storm dumped 48cm (19 inches) of snow on Toronto's downtown?
A: Wrong again if you thought it was 1999 when the armed forces were called out to clear the streets. In 1944, 48 cm of snow fell during a single day. The big news then was that factories producing war munitions were forced to close for a short period of time.

3. In what year did Canada experience its deadliest tornado?
A: On June 30, 1912, a tornado tore through Regina killing 40 people and injuring 300. Is this unusual? In 1922, multiple tornadoes hit southern Manitoba, in 1946 and again in 1974 tornadoes hit Windsor, in 1985 a tornado hit Barrie and in 1987 a tornado hit Edmonton killing 27 people. The Canadian record is full of violent weather.

4. In what year did Canada experience its longest heat wave?
A: Environment Canada tells us that the last two decades have been the hottest on record but you may be forgiven for thinking the dust bowl years of the 1930's were warmer. During 1936, a heat wave lasting twelve days hit Manitoba and Ontario claiming 1,180 lives. Recorded temperatures exceeded 44°C (111F).

5. In what year did Canada record its hottest day?
A: This record was set a year later in 1937 when Midale and Yellowgrass, Saskatchewan recorded temperatures of 45°C.

6. In what year did Victoria British Columbia receive its record snowfall?
A: Victoria, British Columbia is located in Canada's only sub tropical climate zone. Outdoor plants at the Butchard Gardens near Victoria cannot grow unprotected anywhere else in Canada. Unfortunately the worst snow storm in Victoria occurred in 1916, while the world, as some people would say, was recovering from the little ice age.


7. In what year did the Red River overflow its banks resulting in the greatest flood disaster in Canadian history?
A: This one is easy. In 1997 the Red River flooded rising 12m (almost 40 feet!) "above winter levels", as Environment Canada puts it. If you guessed 1997 give yourself half a point. In 1950 the Red River flooded cresting at "9.2m above normal near Winnipeg". Both floods caused approximately $500 million dollars damage in dollars of the year.

8. In what year did the west record its single driest year when many areas in the drought-stricken Prairies received only 45% of their normal precipitation?
A: Think this happened during the Dust Bowl years? Not so! The driest single year on record was 1961.

9. In what year did heavy rains in Quebec kill 31 people swallowing up 35 homes, a bus and several cars?
A: Did you remember the television footage of the Saguenay flood in 1996?

Wrong again! Ten people perished during that flood. The correct answer was the St. Jean-Vianney flood in 1971.

10. In what year did Canada record its coldest wind chill temperatures? (-91°C)
A: Did you guessed anything other than an outpost in our Arctic?
You might find it surprising to learn that this record was measured in 1989 at Pelly Bay in what was then known as the North West Territories? Temperatures in the Canadian Arctic increased dramatically between 1900 and 1940 and then stayed relatively constant. In 2001, the BBC World Service told of mosquitos and robins being sighted at the Arctic Circle.

Right now I can look out the window and see a maybe 1" dusting of snow. The lake has only the barest skim of ice & there are still lots of geese paddling around.
Posted by Karin F. at 9:49 AM