Update #1:
I entered into Rosanna's Christmas Swap quite a while ago. My receipient was Julia of Bear Cabin Miniatures. My gift is coming from Sonia.
Rosanna lives in Italy; Julia in Wales; Sonia is in Spain and of course I'm in Canada. Small world eh!
At any rate, the swap terms were to make something Christmas related that is neither red nor green and to wrap it in an unusual container.
Today Julia wrote to tell me that she had received my package. However she hasn't opened the package because the last swap condition was: no peeking or unwrapping until Christmas eve!
I told Julia that it would be OK to just open the package as my gift was secure within it's container and can't be seen without tearing the container apart.
When my daughter was small she used to try peeking by very carefully undoing the tape holding the wrapping paper together in case the box told of it's contents. So since that time all my gifts come unpeekable. I even told Julia, she could shake the container if she needed to guess the contents by what they sounded like. All the kids do that here....and I'm sure everywhere else too. (unless they've broken, mine won't rattle.) Aren't I terrible! tee hee hee
Rosanna, please forgive me for what I am about to do... 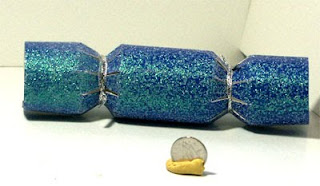 ...but I figure that since we in N. America place our gifts...wrapped of course...beneath the tree as early as when the tree is set up, I might be allowed to show my wrapped gift.
So go ahead, guess....there are 2 items within the Christmas cracker and they don't rattle.

Update #2:
Yuki is settling in nicely. She sleeps with Luna. Gets up at 5 & cries for her saucer of milk.....which she gets when we get up to make coffee at 8!
She's already learned to stop doing whatever she's doing when Ken or I have a red squirt bottle (filled with water) in our hands.
I have learned that baby kitty nails need clipping once a week.
While Kitkat has learned to ignore her, cause she's not going away.


Update #3:
Elly in Amsterdam with all the other things that she's doing, has already finished the second of my 3 promised pet pillows. You can see it on her blog. I won't show any pictures until all three are finished and have arrived.

Update #4:
Chris Verstraete of Candid Canines featured my mouse (among others) on Day 1 of her advent calendar.
Posted by Karin F. at 10:56 AM