All Creatures Great and Small

Today's been the first day in almost a week that we've had sun. Seems like the storm that hit most of northeastern Canada and the States has finally blown itself out. All in all I think we were quite fortunate. At most we received only a couple of inches of snow and at best several days ...and nights!... of howling winds. North of us, perhaps an hour drive away, they were snowed in, receiving more than 40 inches...in a matter of 48 hours. I hate to imagine the height of any snow drifts!
Any excuse for sunshine, I went out to see how much of the lake had frozen over. 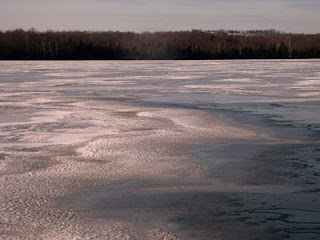 I'd only taken a few steps onto the dock when a small duck, which had been at the shore, perhaps 3 feet away from me, took off but flew only a few feet and then settled back down in the water. Startled me, I can tell you! 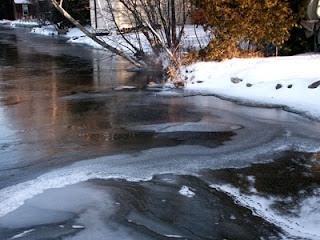 When I looked at the place the bird had come from, I saw a large Canada goose sitting on the ice underneath an overhanging birch. It had its head down on the ice but not like they normally do, which is tucked into their wing.
I thought at first that it might have become enmeshed in the ice & couldn't get out. It's definitely not normal for them to remain stationary with humans so close.
Even when I went closer, all the while talking gently, it never moved although it did bring its head up to look at me. And then finally it got to its feet and walked slowly to the open water and loudly squawking swam some distance away.
All the other birds had left before the storm hit. Nowadays they don't all fly south. There's enough people feeding birds that they can afford to stay as long as they have some open water.....which would not be Orr Lake.
After I replenished my bird feeders, I went back down to the shore and scattered several cups of bird seed. I could still see them in the middle of the lake. Ken suggested putting up some sort of box down there where they could shelter. I'll check again tomorrow & see if they came back but I doubt they will. I hope the goose isn't injured. (Can you see them in the photo? They're the two specks in the middle of the lake.) 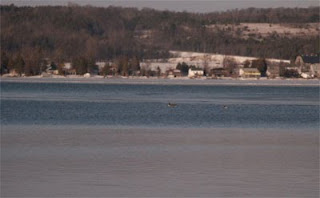 On a happier note, Little Yuki has settled in quite nicely. 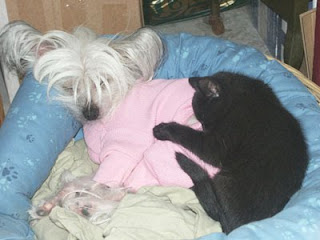 So far she's bitten thru my laptop power cord requiring an emergeny trip into town for a new one; has climbed into my jade tree, causing Ken to make up a song about a Yuki in a pear tree based on the 12 days of Christmas song; continually attempts to climb the curtains; identifies the sound of a spray bottle filled with water being picked up, from half a room away; feels she must eat as much as possible even if the food is in someone else's food bowl....while the owner is eating from it (she'll probably eat us out of house & home when grown) and is well on her way to ruling the roost over the other two.
Posted by Karin F. at 8:26 PM